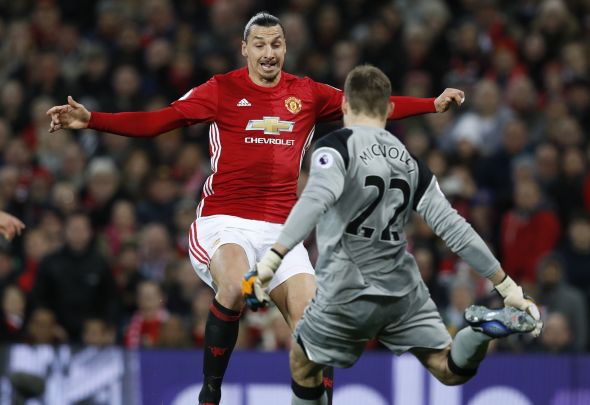 Former referee Howard Webb has claimed Manchester United benefitted from poor officiating during the clash against Liverpool on Sunday afternoon.

Zlatan Ibrahimovic scored a late equaliser in the 1-1 draw at Old Trafford after Liverpool led through a spot-kick from James Milner in the first half.

However, Webb claimed the United striker should not have been able to score as Antonio Valencia was offside before delivering a ball into the box which eventually fell to Ibrahimovic after Marouane Fellaini’s header rebounded off the post.

Webb claims United were handed an advantage as assistant referee Mick McDonough was out of position and he confirmed Valencia was offside before crossing the ball.

“Manchester United benefited from an error by assistant referee Mick McDonough. Positioning is everything as an assistant referee and he is not where he needs to be, which is looking along the offside line,” Webb told the Times, as quoted by The Mirror.

“Because he is too far down the touchline, he cannot judge whether Antonio Valencia is just offside before he receives the ball, which he is.”

Fans on social media have hit out at Manchester United this season claiming they have been given too many off-side decisions in their favour and there was uproar yet again when Ibrahimovic’s goal was allowed.

Earlier this season Henrik Mkhitaryan scored a sensational scorpion kick goal against Sunderland but Arsenal fans were annoyed he was given the Goal of the Month award ahead of Olivier Giroud because they thought the United star’s goal was offside.

Liverpool would have moved back into second place in the Premier League table if they had picked up all three points against United on Sunday.

In other Liverpool news, Jurgen Klopp has hailed the performance of Trent Alexander-Arnold.

We’ve launched an <<EXCLUSIVE TRANSFER WINDOW NEWS FEED.>> ‘Like Us’ on Facebook by clicking here if you want 24/7 updates on all Liverpool transfer news.