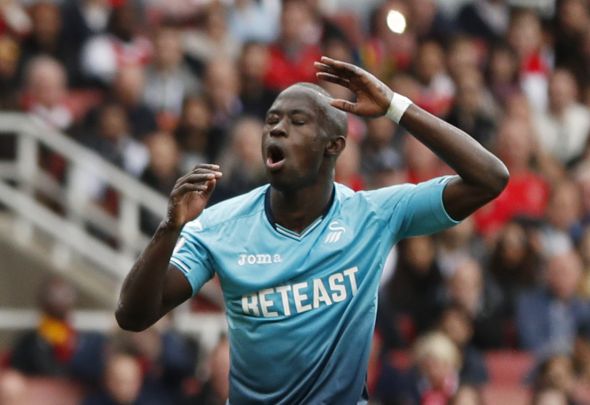 Newcastle have been given a boost in their pursuit of Swansea winger Modou Barrow, according to a report.

Sky Sports claim on their transfer centre blog that the Premier League club are willing to allow the Gambia international to leave this month.

It is said that Swansea have made the emphatic decision following the recent arrival of Luciano Narsingh from PSV, a deal which has pushed Barrow, 24, down the pecking order.

Sky Sports report that a loan move is more likely than a permanent transfer “at this stage”, although there could be a few more twists and turns with another week of the window remaining.

Swansea have turned their attention to Barrow after experiencing frustration in their bid to prise Andros Townsend from Crystal Palace.

Barrow, who joined the Welsh club in the summer of 2014, was a regular in the opening months of the season but last played for the club in their New Year’s Eve 3-0 defeat at home to Bournemouth.

Recently appointed Swans boss Paul Clement has left the wide attacker out of his squad for the last two games, which included an against-the-odds 3-2 win against Liverpool at the weekend.

Barrow has played 19 games in all competitions this season, providing three assists, two of which have come in the Premier League.

Benitez is keen to recruit a pacy wide man and Barrow would be an ideal January signing. He has proven in the top tier that he has the ability to get past players with his power and pace, and also has a few tricks up his sleeve. In theory, he should rip it up in the Championship. In Newcastle, he would be joining a team packed with players on the same wavelength and who should be able to create the space for him to thrive out wide.

In other Newcastle transfer news, supporters react on Twitter to this reported shock transfer.