Julian Nagelsmann is a “standout” manager who could get a lot more out of Tottenham than Jose Mourinho.

That is the view of former Spurs and Scotland defender Alan Hutton who, speaking exclusively to Football Insider, was blown away by the links to the RB Leipzig boss.

The Telegraph claim the 33-year-old will be top of Daniel Levy’s list of potential hires if he decides to axe Mourinho this year. 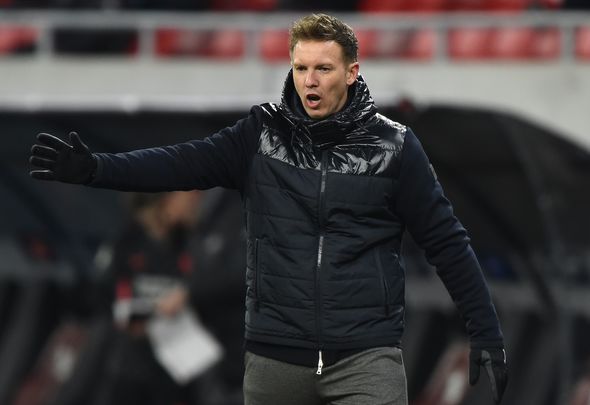 The Portuguese manager’s position has come under threat after a poor run of form which has left Spurs scrambling for a top-six finish.

Spurs have won just once in their last top-flight outings, with the Irons the latest club to pile on the pressure.

Hutton has claimed Nagelsmann is a manager who could get the very best out of Spurs and suggested Mourinho’s position could come under serious scrutiny if the German is open to a move.

“You look at the managers have been linked with Spurs, the likes of Nagelsmann, he is an excellent manager at RB Leipzig,” Hutton told Football Insider assistant editor Russell Edge.

“He is an absolute standout of a manager, for me, to come in and stamp his authority on a squad there’s already very good.

“He could make them even better so I think if Mourinho doesn’t get the wins that he needs, the pressure is just going to mount game by game.”

In other news, Hutton claims Mourinho has thrown Tottenham stars under the bus.