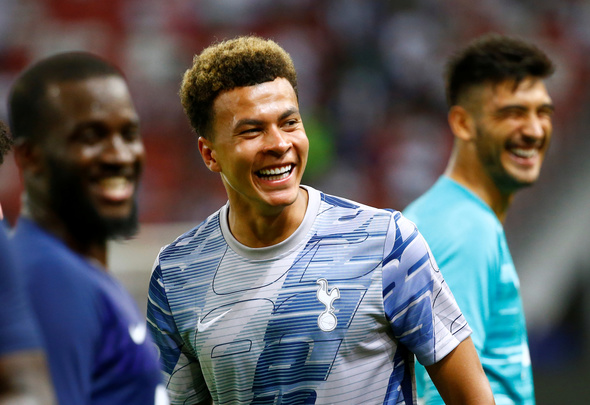 Darren Bent believes that Paris-Saint Germain is the most likely destination for Dele Alli if he is to leave Tottenham.

Speaking exclusively to Football Insider assistant editor Russell Edge, the former Spurs striker, who supports Arsenal, admits he would love to see the 24-year-old make the short move across north London but admits a Premier League switch is likely off the cards.

The England international’s future has been the subject of much speculation heading towards Monday’s transfer deadline after he was left out of four of the club’s matchday squads this season by Jose Mourinho.

The Times report that Dele is considering his future after the latest snub against Chelsea and that state that PSG would likely be more interested in signing the playmaker on loan rather than permanently.

With less than a week of the transfer market left, Bent believes that a move to another Premier League side is unlikely and that the French giants are one of the few clubs who would want the midfielder and could afford to sign him.

“Listen, I’d love him at Arsenal but I can’t see that happening,” Bent told Football Insider.

“I can’t see him going to any of the other Premier League sides either. The only ones I think that would pay it and I think he’d fit in would be at PSG.

“I think they’d pay the money, he’s out of England then, he can play with some of the world’s very, very best – the best in the world in Neymar and Mbappe.

“Him doing that might just help his England cause and Gareth Southgate’s team selection. If you’ve got a player playing in Europe at a very high level and playing with world-class players, when it comes to his place for England, he’s going to be back to the very best.”

Alli has played just twice for Spurs since the start of the new season.

He was hooked at half-time on the opening day against Everton and played just 60 minutes in the Europa League qualifier against Shkendija.

In other Tottenham news, it can be REVEALED the club are close to agreeing personal terms for a marquee signing.