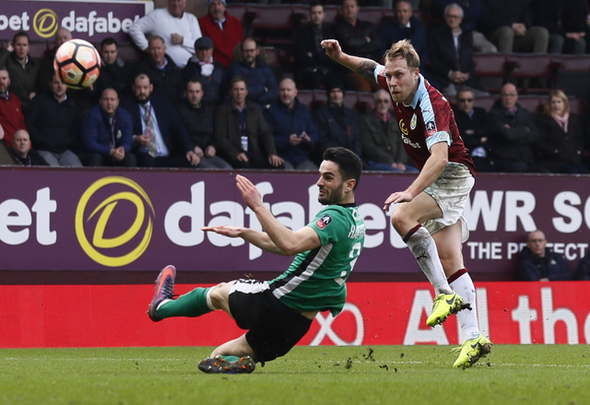 New Rangers signing Scott Arfield thinks it is “inevitable” that the Light Blues are drawn against his former side Burnley in next season’s Europa League after completing a four-year-deal to join the Ibrox giants.

Arfield spent five years at Turf Moor and helped Sean Dyche’s side to a seventh-place finish in the Premier League and a spot in Europe next term – and the 29-year-old admitted he was looking forward to getting the chance to play in Europe again.

The Canada international thinks that the Gers can’t just be happy with going out in the qualifying rounds and should be aiming to go as far in the competition as possible next season under new manager Steven Gerrard.

“I think it’s inevitable we are going to draw them, isn’t it?” Arfield said, as quoted by the Gers’ official website.

“So I am looking forward to that. I managed to play in the first round when I was at Falkirk. We got to the Scottish Cup Final and went into it the next year, so the getting the taste for it was invaluable for me to want to go back there again.

“We managed to get there with Burnley and it was completely out the odds that we got there. Thankfully I’m coming up here to a club that the boys have put in the hard work and have managed to consolidate a Europa place, but I don’t think we should be happy just going out in the qualifiers, we need to look forward and see where this takes us.”

Rangers and Burnley meeting in the Europa League does seem pretty certain to happen now given the links between the clubs in recent years – Joey Barton, Matt Gilks, Kyle Lafferty and Arfield all playing for the Clarets before heading to Ibrox. Steven Gerrard will need to ensure that the Gers do better than last season’s humiliating first round exit against Progres Niederkorn of Luxembourg though if the Ibrox giants are to have any sort of run in the competition. A trip to Turf Moor to take on Sean Dyche’s side would be a good test of where the Gers are against a mid-table Premier League side and would likely give Gerrard a good benchmark to work with. Before that happens though, Gerrard has eight weeks to build a team and get players in that he feels are capable of mounting a sustained title challenge and hopefully stopping Celtic’s recent dominance of Scottish football.