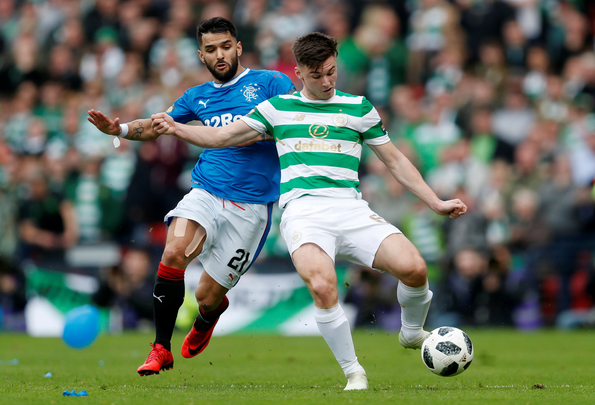 Celtic left-back Kieran Tierney has admitted that he would love to emulate the wondergoal scored by Shinsuke Nakamura against Rangers for the Hoops ten years ago.

Nakamura’s swerving thunderbolt is one of Tierney’s first memories as a Hoops fans, and he would love to follow in the footsteps of the Japanese midfielder with a goal in what could be a title party for the Hoops against their Glasgow rivals on Sunday lunchtime.

“It’s a blur because I was so young. But I have great memories of Nakamura scoring that brilliant goal from 40 yards,” he said, as quoted by the Daily Mail.

“That’s one of my biggest memories. I’m not sure if that was my first game – but it won’t be far away.

“That Nakamura effort was the kind of goal you try to score up the park when you’re small – but you don’t succeed.”

Tierney has been nominated for goal of the season for his own wonderstrike against Kilmarnock in August, but he admitted that a goal against the Gers would surpass that.

“That was a surprise, a 40-yarder. A goal on Sunday would maybe surpass that. Let’s see how it goes.”

Tierney has been a mainstay for the Hoops this season, making 51 appearances for the Bhoys as they stand on the verge of clinching a second successive domestic treble.

A Tierney goal against Rangers would certainly be one of the most memorable goals scored by the Hoops in recent times, and even more so if the goal was similar to Nakamura’s effort, which was a fantastic goal. Tierney won’t even be thinking about scoring a goal though on Sunday, he will just be thinking about getting the three points which would clinch a seventh successive title for the Hoops, and Tierney has been a big part of that, as he has once again been one of the stand-out performers for the Bhoys this season, and if he can end the season on a high with a goal against the Gers, all the better.

In other Celtic news, John Hartson thinks the Hoops will defeat Rangers on Sunday

Don’t miss out on breaking and exclusive Celtic news by clicking here for our brilliant 24/7 updates on Facebook,Instagram and YouTube.