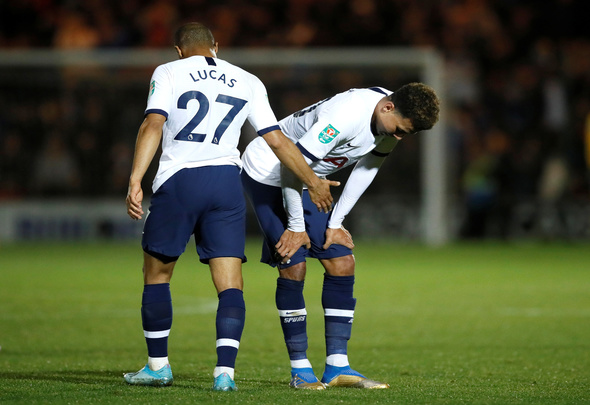 Noel Whelan claims that Tottenham chairman Daniel Levy will be fuming with midfielder Dele Alli after failing to impress against Colchester in the League Cup.

The former Leeds striker, speaking exclusively to Football Insider assistant editor Russell Edge, claims that the 23-year-old should have been a standout performer against the League Two side but that he was a long way off the expected standard.

Alli played the full 90 minutes against Colchester on Tuesday, the minnows dumping the north Londoners out the cup in a penalty shoot-out after a 0-0 draw in normal time.

With Alli looking to return to fitness after injury curtailed his start to the season, Whelan says that he is now a long way down the pecking order for England, while also claiming the club chairman will be raging over what he saw.

Whelan told Football Insider: “The thing is he’s fighting to get back into the England squad. There are players that are well, well ahead of him. Look at James Maddison, the way he’s playing, I can’t see Alli taking his place any time soon.

“They should be romping home. Dele Alli needs to find his form and find it quick. Tottenham need him, he definitely needs it. He needs to find that desire and strength within himself. We’re talking about a team who can’t manage to get through a cup tie against a team two or three divisions lower than them.

Alli has featured just three times across all competitions after his injury problems in pre-season, featuring in both the Premier League clash against Arsenal and Champions League game with Olympiacos – both of which saw Spurs let a 2-0 lead turn into a 2-2 draw.

In other Tottenham news, Darren Bent has told Football Insider it looks as though Mauricio Pochettino looks “forced” to play one player at Spurs.