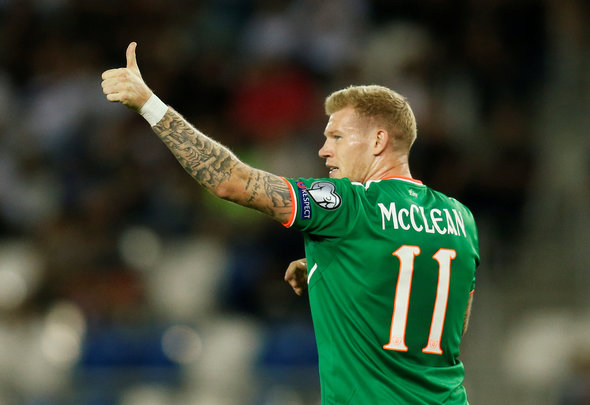 West Brom winger James McClean has urged God to help Celtic get the better of Rangers when the two Old Firm rivals come to blows at Ibrox on Saturday.

McClean, 28, makes no secret of his affinity towards the Hoops and there will be no doubt about where his loyalties lie this weekend, especially as Albion don’t play until Monday when they take on Arsenal in the Premier League.

Now, the Republic of Ireland winger has aimed a huge dig at the Light Blues ahead of the fixture, calling them the third best team in Glasgow, suggesting that they’re worse than Partick Thistle, who Pedro Caixinha’s men beat in the League Cup on Tuesday night.

“Please God, if there’s one thing you can do for me today, then can you ensure Celtic tank the third best team in Glasgow,” he said on his personal Twitter account on Saturday morning.

McClean has made a name for himself as being a highly controversial character in English football and many believe that he could one day play for Celtic due to his political and religious beliefs.

The former Derry star has been in mixed form ever since signing for West Brom in 2015, but has started the current season well, making six appearances across all competitions.

Celtic can move well clear of Rangers in the Scottish Premiership if they manage to earn all three points at Ibrox this weekend.

Brendan Rodgers’ led his side to five wins in six matches against their bitter rivals last season when they returned to the top-flight following their financial meltdown.

In other Rangers news, the BBC has reported that this senior duo is in line to return against the Hoops.