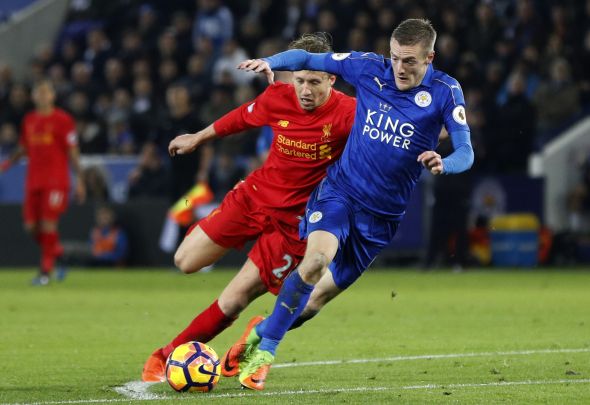 Jamie Carragher has revealed his sympathy for Liverpool’s Lucas Leiva after he was terrorised by Jamie Vardy during Leicester’s 3-1 win on Monday night.

Lucas, 29, was used as a makeshift centre-back by manager Jurgen Klopp once again this season, deputising for injured defender Dejan Lovren alongside Joel Matip.

However, England international Vardy scored a superb brace at the King Power Stadium, making Lucas look very average away from his normal position of central midfield.

Liverpool legend Carragher criticised Klopp for selecting Lucas at the heart of the defence, claiming the Brazilian does not possess the correct attributes needed to play there.

“I feel sorry for Lucas,” Carragher told Sky Sports 1’s Monday Night Football programme. “He comes under a lot of criticism, but the simple fact is he should not be playing at centre-back.

“I was worried when I saw him line up against Vardy; we all know how quick Vardy is. Lucas hasn’t got the pace or the power at centre-back, and if you play out of position at this level, you’ll get found out. He has been tonight.”

Vardy opened the scoring with a neat finish when put through on goal by Marc Albrighton, before Danny Drinkwater scored a wonderful volley that gave Simon Mignolet no chance.

Former non-league attacker Vardy then doubled his tally with a header from Christian Fuchs’ cross, leaving Philippe Coutinho to score a consolation for the Merseyside giants.

Lucas has less than six months remaining on his Anfield contract and his position at the club will be in even more doubt after Monday’s display, despite being played out of position.

Since his debut in August 2007 against French side Toulouse, Liverpool’s number 21 has gone on to make a huge 334 league and cup appearances for the Reds.

In other Liverpool news, Stan Collymore has delivered this scathing assessment of his former side.