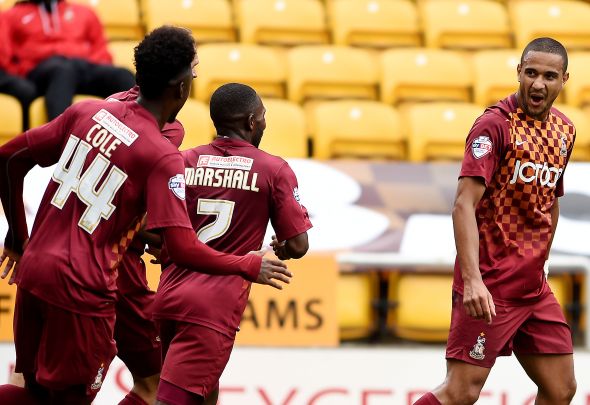 Leeds have suffered a blow in their pursuit of James Meredith as Norwich are set to rival Garry Monk’s side for the Bradford star’s signature, according to a report.

Australia’s FourFourTwo claim that Norwich have entered the race for the Australia international, who has less than six months remaining on his current contract.

Meredith, 28, was first said to be interesting Garry Monk’s side back in December,although it was reported that they were looking for a deal for next season.

Australian FourFourTwo claimed on Christmas Eve that Meredith was interesting Monk’s promotion-chasing side, as he looks for back-up to current first-choice left-back Charlie Taylor.

However, after Alex Neil’s Canaries lost Martin Olsson to Premier League side Swansea, the east Anglian club are now be in the market for a new left-back.

Winning two full Australia caps, Bradford’s number three is known for his explosive speed and is more than willing to get forward and provide his side with an attacking outlet.

Meredith has starred in Stuart McCall’s Bradford side this season, making 25 appearances in all competitions and keeping 11 clean sheets in the process.

Norwich looking to sign Meredith could be a blessing in disguise for Leeds. The Canaries are more in need of signing a left-sided defender and moving for Bradford’s number three could dash Leeds chances of signing the League One star. However, Meredith is a player that should be overlooked by former Swansea boss Monk with Meredith untried in the Championship. In what is a big step up from the third tier of English football to the second, the left footer should be considered as a last resort by Monk and the Leeds manager would be better advised to chance his arm with youth player Tyler Denton as Leeds’ back-up. Seeing him join Norwich could mean that Leeds will avoid signing a player that has the chance to flop in the Championship.

In other Leeds transfer news, fans on Twitter want their side to sign this reportedly available Premier League striker.