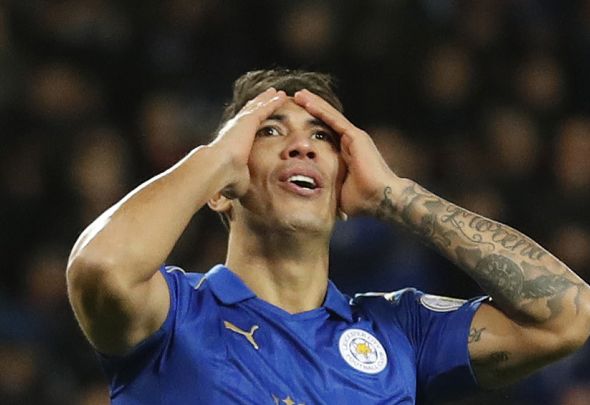 Leeds fans are eager on Twitter to see their side move for Leicester City star Leanardo Ulloa after he reportedly considered handing in a transfer request.

Sky Sports revealed on their official Twitter account that the 2015-16 Premier League champion is weighing up quitting the King Power stadium.

Leicester striker Ulloa is considering handing in a transfer request due to a lack of first-team opportunities: https://t.co/zISHBqrX60 pic.twitter.com/MweW4vNQ0g

The former Brighton striker is currently behind the likes of England international Jamie Vardy and summer signing Islam Slimani in Claudio Ranieri’s side.

Leeds are in the market for a striker this month, as Garry Monk looks to lift the burden on top scorer Chris Wood’s shoulders as he continues to fire his side to Championship promotion.

The latest striker to be reportedly on Monk’s radar is Bournemouth’s Lewis Grabban, after the Mirror claimed on their transfer centre blog on Wednesday 11 January (9.20pm) that Leeds were keen.

Leeds fans believe the rangy target man would be the perfect signing on Twitter, with many claiming that he would improve Monk’s side.

Could do a job #lufc

Ulloa apparantly handing a transfer request in or considering it. Defo worth a try at getting him ya reckon ? #lufc

No action #lufc. Hoped we had our new attacker in by now. What about Ulloa?

Ulloa handed in a transfer request according to sky sports 👀 #lufc

Since his move to Leicester in the summer of 2014, Ulloa has made a total of 91 appearances for Leicester and scored 20 goals as well as providing eight assists for his side.

With exactly 50 appearances in England’s second tier, Ulloa almost has a ratio of one goal every two games  with 23 goals in that time and that kind of goalscoring form could prove crucial in Leeds’ promotion charge.

In other Leeds transfer news, here are three players Monk could have been scouting after being spotted at Oakwell watching Barnsley’s FA Cup clash against Blackpool.