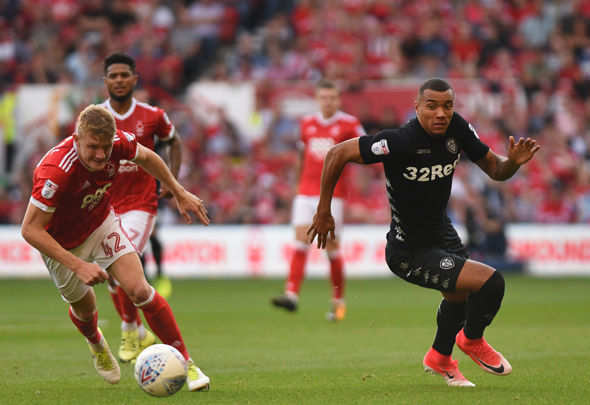 Jay-Roy Grot was handed his first Leeds United start in their League Cup triumph against Burnley on Tuesday night – and fans delivered mixed verdicts on his display.

Grot arrived at Elland Road last month after signing from Dutch club NEC for an initial £750,000 in a deal that could rise to £1.5million.

The 19-year-old is one of four strikers jostling for the centre-forward spot in the Leeds starting XI and was given his first chance to lead the line from the start at Turf Moor as main man Pierre-Michel Lasogga dropped down to the substitute’s bench.

Grot played 85 minutes of the match but did not open his account for Leeds in what was his fourth appearance for his new club.

Leeds were 1-0 ahead when the teenager was replaced by Lasogga and supporters differed between urging patience for the new signing and claiming he is not yet ready to be a first team regular.

Grot is thinking, mmm am next in line #lufc

Total starts for Cibicki, Grot and CBJ is 4 between them…all in the cup… I believe the word is patience. #lufc

Cibicki, Grot, CBJ all looked a bit suspect but everyone else played well for me. Best we’ve seen of Klich. Vieira/Berra usual selves. #lufc

Goals from substitutes Hadi Sacko and Pablo Hernandez took an entertaining clash into extra time with the score locked at 2-2.

Leeds then triumphed 5-3 in a penalty shoot-out through cool takes from Lasogga, Hernandez, Mateusz Klich, Stuart Dallas and Ezgjan Alioski.