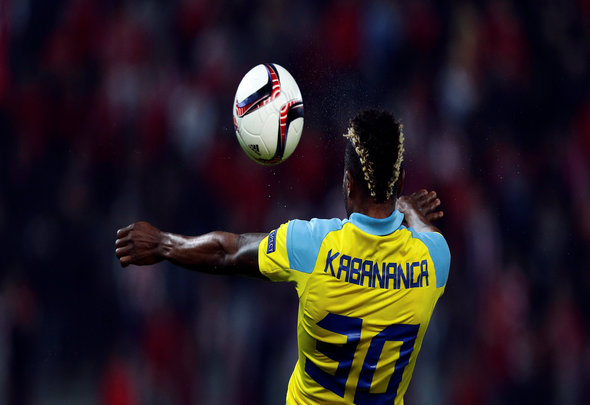 Leeds are reportedly in the race to sign Astana striker Junior Kabananga – and fans have taken to Twitter to complain about yet another attacking player being linked with a move to Elland Road.

New outlet TeamTalk has reported that Hull and Nottingham Forest are also in the hunt for the 28-year-old, who is valued at £1.5million by Champions League side Astana.

It is understood that the Whites are in pole position to snap up the DR Congo international and add yet another striker to what is already a rather top-heavy squad.

Chris Wood, Caleb Ekuban, Souleymane Doukara and Marcus Antonsson are already on the books at Elland Road even though manager Thomas Christiansen looks as though he will employ a system which includes a lone striker up front.

That means that should Kabananga join Leeds, they will be inundated with players that are vying for one spot in the first-team, which is likely to be occupied by Wood for most of the campaign.

That appears to be where the worry lies for the Leeds supporters, who seem to prefer it if their club would focus on bolstering their defence before anything else.

However one fan admits that he “could be worth a punt”.

interesting possibility. Only a YouTube video to try to assess, but first touch looks extremely good. Makes the rest easier.

Never heard of him

Imagine having a player called kabananga in your team 😂✍🏻#lufc #signhimup

That's a weird way to spell centre back… #LUFC #MOT

Ffs why don't we play Antonsson?. There's a good player there if used right & he WANTS TO PLAY for Leeds
Give the lad a fair chance

He destroyed Legia Warsaw in UCL qualification, but we don't need another winger.

Congo have produced some baller forwards in the last few years, Bakambu being the best probably. Could be worth a punt.

Kabananga will be hoping to help Astana reach the group stages of the Champions League this month, but his side will have to beat Scottish champions Celtic over two legs before he can showcase his talents on a much bigger stage.

In other Leeds news, fans have reacted on Twitter to the confirmed news of yet another defender signing.