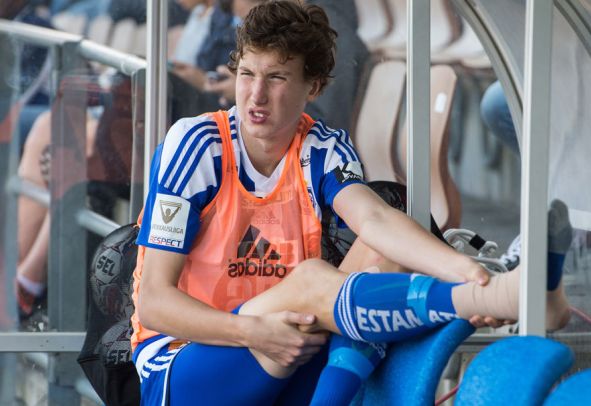 Leeds United are in the hunt to sign HJK Helsinki defender Aapo Halme, according to a report.

Finnish news outlet HS claims that the Whites remain interested in Halme, 19, after HJK blocked an exit for him in the summer as he was called up to first-team duties in the wake of a defensive injury crisis.

HITC has previously reported that Leeds, as well as Ajax, had scouted the 6ft 8in defensive colossus before the summer transfer window, but it seems that they now still in pursuit of him to strengthen their centre-back options after the summer developments.

Halme has featured regularly in the Finnish top-flight, helping his side win the title this season by making 16 appearances and scoring one goal in the process.

The Finland youth international has not been in the squad in the last four fixtures, suggesting that he isn’t in the immediate first-team plans when the regular senior players are at full fitness.

Leeds have recruited from far and wide in the summer to improve their development side and it seems Victor Orta and co have not finished yet. Halme looks like a promising youngster and with a good amount of senior football already under his belt, he could move to Elland Road and become the fourth choice centre-back that Thomas Christiansen needs. The boss has struggled with his defensive options this season due to injuries and suspensions, leaving him to name midfielder Conor Shaughnessey in the heart of defence. Halme could be the player to come in and step up when in need of an extra body in defence. He may be pretty cheap too.

In other Leeds United news, Noel Whelan has claimed that the Whites are in need of after the loss against Cardiff.