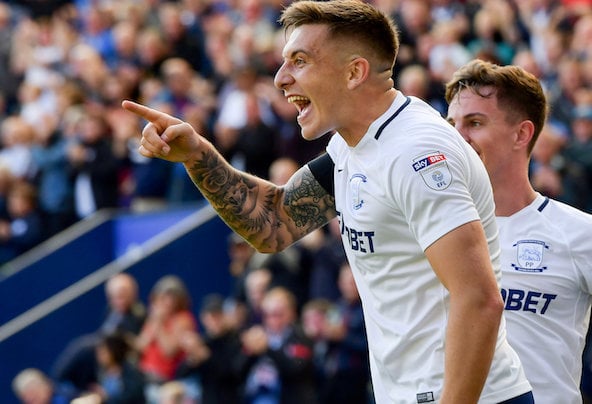 COMMENT
Leeds have once again been linked with a move for in-demand Preston North End striker Jordan Hugill.
Football Insider exclusively revealed on Wednesday that after failing to land the player last summer, despite Hugill handing in a transfer request, director of football Victor Orta will make a new attempt to sign him in January.
Hugill is on the goal trail again for PNE this season, with 10 goals in 26 appearances, and Thomas Christiansen sees him as the man who could make the difference in Leeds’ promotion push.
We think he could be one of the deals of the January transfer window if Leeds are successful.
Leeds need more goals in their arsenal if they’re going to mount a serious bid for promotion, with their squad looking like a 6th-10th place squad rather than a 2nd-6th one.
Jay-Roy Grot hasn’t managed to turn his physical presence on the pitch into anything meaningful in front of goal and after a decent start Pierre-Michel Lasogga has turned into a fringe player who hasn’t scored since October.
Samu Saiz, one of the buys of the summer, let his team down with the FA Cup spitting incident and is now out for six games.
That leaves Christiansen with a huge problem, but one that would be solved instantly with the addition of Hugill.
He is exactly the sort of player they need to finish in the top six. He’s got proven experience in the Championship, scoring goals for a team that’s not as strong as Leeds.
He’s got guaranteed goals, which Leeds desperately need at the moment.
And Leeds can offer him the lure of Premier League football with a true giant of the English game.
Preston might be determined to keep him but it looks like Leeds are serious about prizing him away from Deepdale.
And if they do it could be the most important deal Orta has ever struck.
In other Leeds United transfer news, there has been some inside knowledge leaked over the Whites’ pursuit of a red hot striker.