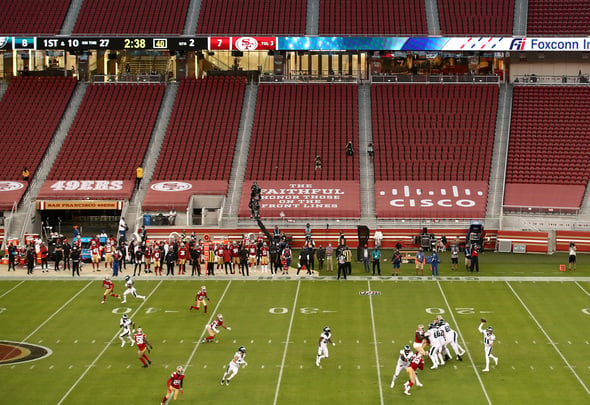 That is according to football finance expert and new Football Insider columnist Kieran Maguire, speaking exclusively after 49ers increased their shareholding in the club last week to 37 per cent.

The American football colossus purchased the additional shares in a £50million deal and, along with majority shareholder Andrea Radrizzani, are said to have big ambitions for the club.

Radrizzani recently reiterated his desire for Leeds to follow the Leicester City model and achieve European football by 2024.

Such an approach requires sustainability and stability, and that means Leeds will look to take advantage of commercial opportunities that the 49ers deal presents, says Maguire.

He told Football Insider: “As a Championship club, they were streets ahead of everyone else because of the nature of the fanbase.

“But their commercial income in 2019 was £21m, compared to £280m at Manchester United, for example. It will have gone up as a result of getting to the Premier League but the 49ers still feel the club is probably underutilised.

“They want to use their knowledge of sports fans and the sports market to grow it further.

“There is certainly an opportunity for cross-collaboration in terms of merchandising. You broaden your merchandise range with this deal.

“An NFL-LUFC style jersey would certainly produce interest. Pre-season tours in the long-term, if Leeds do get a better pitch and bigger stadium, then 49ers might play a fixture at Elland Road. That would be huge.

“So they are seeing the potential for tie-ups. I think San Francisco have been pleasantly surprised that Leeds’ profile has exploded since promotion, far more than other clubs who have recently got there.”

Praag Marathe, 49ers President, was made club vice-chairman as part of the arrangement.

In other news, Leeds knocked back several approaches from a Championship club for Sam Greenwood.