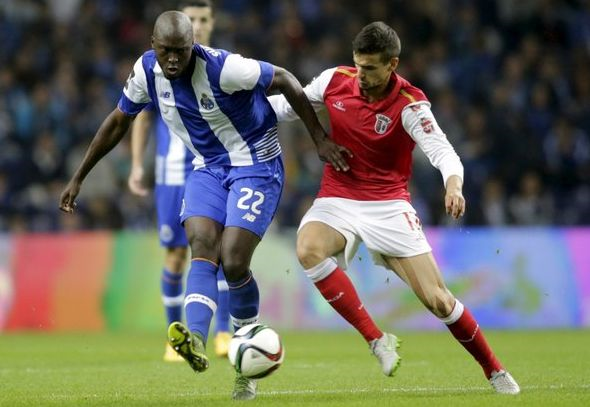 Liverpool have sent scouts to monitor Porto’s Danilo Pereira, according to a report.

A Bola reports that the Reds are one of several teams keeping an eye on the 25-year-old as it is understood that the Portuguese club will have to sell some of their key players in the near future.

Manchester United are one of the teams who have also sent representatives to keep an eye on the midfield enforcer, but officials from Kaiserslautern, Montpellier, Nice, Sevilla and Trabzonspor also had accreditation to watch Porto’s latest game against Nacional at the Estadio do Dragao.

A Bola reported that Arsenal had also been keeping tabs on the midfield enforcer.

The Express previously reported that Arsenal had a bid rejected for Danilo after failing to meet a buy-out clause of £31.7m.

Danilo has made 32 appearances for Porto in all competitions this season, scoring two goals in the process.

He played in all seven of their Champions League games, including the 5-0 demolition of Premier League champions Leicester.

He played a role in Portugal’s Euro 2016 winning campaign as he featured in five games for his country to help them reach the final. Unfortunately for Danilo, he didn’t make it off the bench for the extra time victory over France in the final.

The defensive midfielder has previously played for Parma and Maritimo before moving to Porto in 2015 where he has become a mainstay in their side.

Since moving to the club, Danilo has made 77 appearances in all competitions for Nuno Espirito Santo’s team.

Danilo is a very highly rated player in Portugal and he’s the type of defensive workhorse that Liverpool need. Jurgen Klopp’s side have leaked goals this season, and the best sides have someone who sits in front of the back four to offer extra support to the rearguard. Liverpool don’t have a player who can do that to the required level that the club wants to be at, but Danilo is the defensive midfielder who can bring that much-needed strength and aerial presence to the side. Unfortunately if Man United are also keeping track, they may have an instant advantage due to Jose Mourinho being a Porto legend.

In other Liverpool news, PSG look set to make a loan swoop for a 27-year-old player.