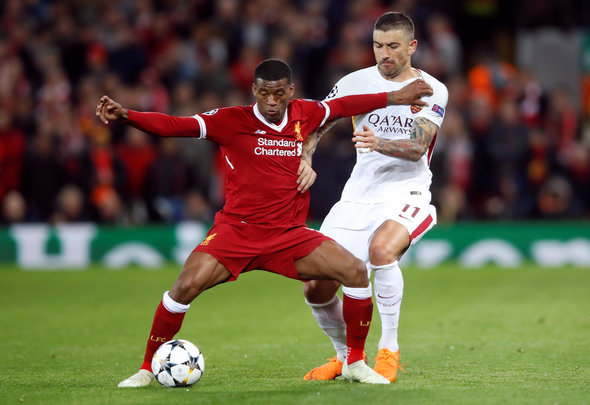 Liverpool fans have taken to Twitter to annihilate Georginio Wijnaldum for his performance in his side’s 1-0 defeat to Chelsea at Stamford Bridge on Sunday evening.

Wijnaldum, 27, kept hold of his place in Jurgen Klopp’s starting line-up for the heavyweight showdown in the capital, however the Dutchman did little to impress the Reds fans who watched him.

The former Newcastle star failed to get a grasp on what was happening in the midfield and did not do enough to help his side threaten to Chelsea defence as Liverpool fell to their third straight Premier League game without a win.

Now it seems that Liverpool fans have lost it with Wijnaldum, with one angry member of the Anfield faithful claiming that the Netherlands international exhibited a “disasterclass” at Stamford Bridge.

Get Wijnaldum out of the 6 role. Absolutely embarrassing.

Such a bad half. Wijnaldum one of the worst players we had in years useless it sucks that he is our only option. I really don't see us winning this game

wijnaldum is trash away wtf

Wijnaldum has been a mainstay for Liverpool this season due to the continual injury issues within Klopp’s midfield.

The central midfielder has made 48 appearances in all competitions for the Merseyside club, scoring two goals and supplying four assists in the process.

As it stands, it does look as though he will be starting in midfield for the Champions League final against Real Madrid later this month.

Wijnaldum has started eight of the club’s games on their route to the final with his goal against Roma earlier this week proving pivotal to Klopp’s men getting through the semi-finals.