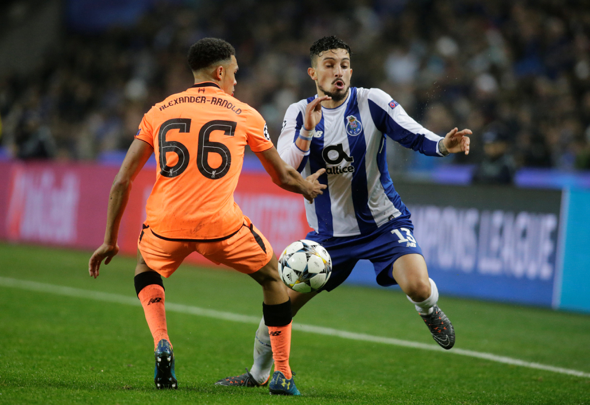 Liverpool fans are hailing Trent Alexander-Arnold as the future after an assured display in the 5-0 demolition of Porto in the Champions League on Wednesday night.
The 19-year-old played 79 minutes at the Estádio do Dragão and became the youngest Liverpool player to play in a Champions League knockout match.
And the verdict from the fans was that he was fantastic and will go on to be a huge player for the club.
As usual, the Liverpool attackers stole the show, with Sadio Mane getting a hat-trick and Mohamed Salah and Roberto Firmino completing the triumvirate.
But the defence was solid, with Virgil Van Dijk winning plaudits in the centre and Trent Alexander-Arnold wowing fans with a performance beyond his years.
Here are the best reactions after a brilliant performance from the youngster:

Trent Alexander Arnold is the future, not sure if he is in calculations for World Cup squad but those ball whipped into Kane and Co could do huge damage #future #YNWA

Trent Alexander-Arnold became the youngest Liverpool player to feature in a Champions League knockout match, aged 19 years and 130 days. & didn't he do well.

People forget Trent Alexander Arnold is still a teenager. That's all you need to know about his potential. #LFC

Alexander Arnold will be the best right back in the world. The hattrick was good for Mane's confidence. His play still needs improvement tho

The way he defended today, you can easily say how he's matured throughout the season. What a talent!

Trent Alexander-Arnold had a 10/10 game for a young fullback.

How good is Trent Alexander-Arnold though? Unphased by a Champions League game away at Porto. Future captain. #LFC

Off my nut the other day and said Trent Alexander Arnold is going to be one of the best around in a few years.

Would say it again this second. Unreal talent.

The second leg of the tie is surely a formality now but it plays out at Anfield on Tuesday March 6.
Liverpool fans will already be looking forward to the quarter-finals and dreaming of another European triumph.
In other Liverpool news, McDermott sends hilarious tweet about Mo Salah after Liverpool win v Porto