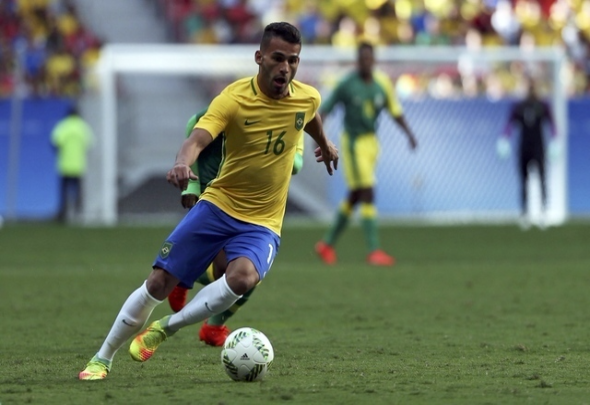 Liverpool have joined the race for Santos defensive midfielder Thiago Maia, according to a report.

ESPN Brazil has named the Reds alongside several European big names, including Napoli and Monaco in the hunt to sign the 19-year-old.

The report states that the Serie A side have already placed a £10million bid for the teenager, while Santos aren’t ruling out selling their youth graduate.

The midfielder helped Brazil on their way to an Olympic gold medal in the summer, playing three times in the tournament.

He he has also already played in 50 encounters for Santos at his young age after making his debut in October 2014.

He has broken through the same system as European greats Neymar, Robinho and Alex and Maia could be the next breakthrough star from the Santos academy.

He could become a great asset to Liverpool, who are in need of defensive reinforcements in the winter window.

The Merseysiders are currently in third place in the Premier League, but their goals against tally doesn’t read so well with 20 goals conceded in 20 games.

The defence has been a particular weakness of Jurgen Klopp’s outfit for a number of years, stemming from Brendan Rodgers’ time in charge.

He will now be looking at options for January who can help his side push on for their first ever Premier League title.

Maia could prove a very worthwhile signing for Liverpool in the winter window. The defensive midfielder already has a couple of years under his belt at his early age and it is thought that he will only get better. The Merseysiders obtained Lucas Leiva from Brazilian outfit Gremio in 2007 when he was just a year older than what Maia is. He has proved to be a very good servant to Liverpool in his nine years at the club and the Reds will be keen for a similar return from Maia. There is no doubt that Liverpool’s defence needs strengthening and the young starlet could be the one to do so, while also developing into a future star.

In other Liverpool transfer news, Martin Tyler believes the Reds could win Premier League title if they sign this player.