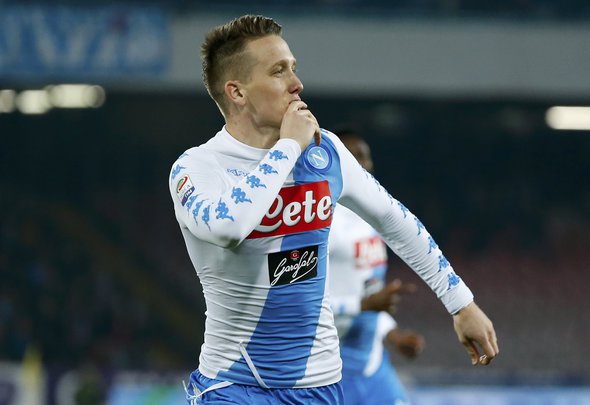 Liverpool have launched a stunning £25million bid for Napoli midfielder Piotr Zielinski, according to a report.

Italian newspaper Il Mattino claimed on their website that the Reds are also facing stiff Premier League competition from Tottenham, who are said to have tabled a similar bid of their own.

However, it is understood that Napoli have rejected both advances for the Serie A playmaker, who is reported to have a staggering £61.5million release clause tied into his contract.

Il Mattino says that the Italian outfit will now be looking to open fresh contract talks with Zielinski and offer him £1.7million-a-year and remove his release clause.

Zielinski, 23, enjoyed a brilliant debut season with Napoli, after he moved from Udinese last summer in a deal worth £11million.

He made 47 appearances across all competitions, scoring six goals and supplying seven assists.

The 23-times Poland international, who began his career at Zaglebie Lubin in his homeland, proved that he is not afraid of the big clashes when he played starring roles in big wins against both Inter Milan and Lazio as Napoli finished third in Serie A.

Liverpool need to make improvements all over the pitch this summer and Zielinski looks like someone who could come in and instantly displace a player like Jordan Henderson or Georginio Wijnaldum judging by his performances with Napoli this season. However they aren’t the ones that Jurgen Klopp has to be improving on straight away. The German has to be more concerned with his defence and striking options – everything in between is at a good level. Klopp should be targetting a new centre-back, left-back and striker first before splurging £25million on someone he doesn’t need as drastically. Zielinski is good but is definitely not going to be worth more than Liverpool’s early valuation of him.

In other Liverpool news, Jamie Redknapp believes this 25-year-old would be the perfect signing at Anfield this summer.