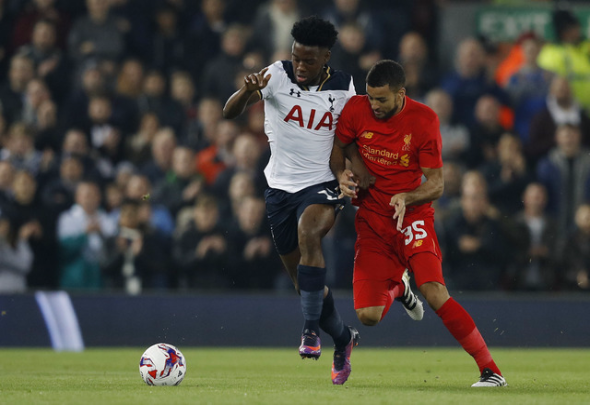 Midfielder Kevin Stewart is set to leave Liverpool this summer with interest from Premier League and Championship clubs, according to a report.

Sky Sports have claimed on their transfer centre blog on Wednesday (1.00pm) that the 23-year-old has interest from Stoke, Burnley, Brighton, Derby, Norwich and Aston Villa who are looking at a loan or permanent deal.

The once highly thought of defensive midfielder still has four years remaining on his contract at the club.

However, he has featured just four times in the Premier League for Jurgen Klopp this season with his last appearance coming back in September during a 2-1 win over Chelsea.

Stewart has also featured in five cup matches this season, but it is clear he is not a part of Klopp’s plans and at his age he may now be looking to move on in an attempt for more first team football.

The midfield enforcer has been at the club for three years since joining from Tottenham in the summer of 2014 on a free transfer.

He has subsequently had loan moves at each of Cheltenham, Burton and Swindon in the English football leagues and he has played just 20 times in total for Liverpool since his move.

If you weren’t a Liverpool fan, you wouldn’t really know who Stewart was and then you’d be further alarmed when you find out that he’s 23. The midfielder has wasted a few years of his career by sitting in the Reds’ reserves and at 23 you’d have expected him to have played a few more times if he was still on the books at the club. It is clear that he needs a move away from Merseyside and a club like Aston Villa where he would be afforded more game time may be ideal for him. Stewart was once regarded as a bright prospect and if he can recapture that form at Villa he could become the face of their new planned uprising. Therefore, a permanent move away from Liverpool is definitely the best for all parties in this deal.

In other Liverpool transfer news, the Reds board are discussing a move for this 20-year-old Premier League attacker.