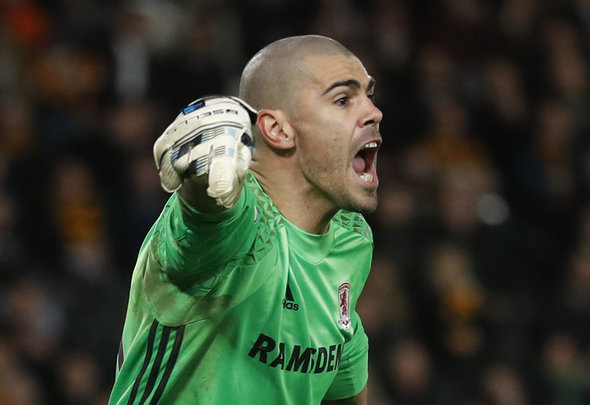 The Sun has revealed the former Barcelona ace will quit Boro this summer, following their relegation to the Championship.

With just one year left on his contract he could be available in a cut-price deal as Middlesbrough look to cash in as they prepare for life in the Championship.

Pep Guardiola made an enquiry about the shot stopper last summer, and he might well try to sign him again this summer, following an average season for Claudio Bravo and Willy Caballero.

It is said that the 35-year-old is keen to stay in the English top flight and has been in good form for the Riverside club this season, keeping eight clean sheets in 28 Premier League appearances.

Klopp should do everything in his power to make sure the 21-time Spain international moves to Anfield instead of the Etihad.

Liverpool’s goalkeeping woes have been much publicised as Simon Mignolet and Loris Karius both failed to impress in the early parts of the campaign.

Despite Mignolet’s recent upturn in form, Valdes would still provides an excellent back-up option, if Klopp wants to sign someone to rival him for the Reds’ number one jersey.

Although he is 35 Valdes has shown through his performances at Boro he can still perform at the top level.

His experience is second to none and could be a vital addition to the squad if Liverpool confirm qualification to the Champions League.

Valdes made more than 500 appearances in all competitions for the Catalan giants, and was part of six La Liga winning sides.

With Klopp’s faith in Mignolet growing, it is unlikely he will shell out a large transfer fee for a new goalkeeper, and Valdes is a good, cheap option.

Even if he signs and does not become the number one choice, the former Man United ace has a wealth of experience he can pass on.

Although Valdes might fancy a reunion with his former Barcelona boss, Klopp must do all he can to bring him to Merseyside.

In other Liverpool news, here’s why Klopp should sign this out of contract Bundesliga ace.