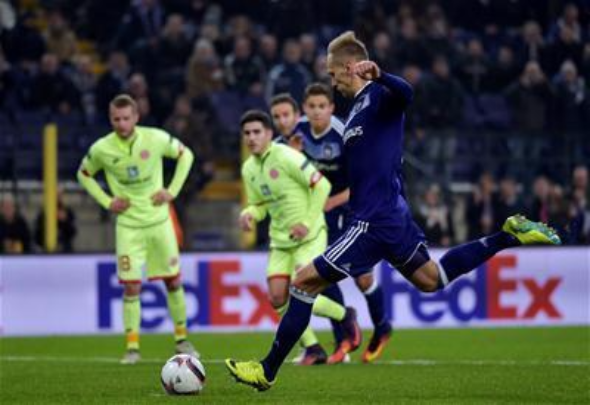 Liverpool are set to battle with West Ham to secure the signature of in-demand forward Lukasz Teodorczyk, according to a report.

Italian outlet Corriere Dello Sport claimed that both sides are interested in signing the Dynamo Kiev striker, who is currently on loan at Belgian giants Anderlecht.

However, both Liverpool and West Ham will face stern competition from Euro giants Benfica and Sevilla for the services of the 25-year-old as he continues to turn heads in the Europa League.

The Daily Mirror claimed last month that Teodorczyk is valued at £12million by his parent club as he still has three years remaining on his current deal.

Anderlecht, who are just five points off the top of the Belgian Jupiler League largely thanks to the Poland international’s explosive form in front of goal, do have an option to keep their on-loan forward permanently.

They are likely to exercise that clause – which will cost them around £4.3m – after he scored 17 goals in just 19 starts for his loan side.

The question then would become how much it would take to prise him from Anderlecht.

With Danny Ings and Philippe Coutinho sidelined for a delayed period, the signing of Teodorczyk would benefit Jurgen Klopp’s side as they continue to apply pressure at the top of the Premier League.

As for West Ham, Slaven Bilic is likely to enter the January transfer market for a new striker as his current forwards continue to struggle in front of goal.

Both West Ham and Liverpool would be foolish not to chance their arm on the Polish goal machine, as he continues to sparkle for Anderlecht. His ability to score against Europa League opposition such as Mainz and Qabala proves that he can find the net against a strong defence, as both sides look to add firepower to boost their Premier League campaigns. With Liverpool’s abundance of attacking options in the likes of Divock Origi, Daniel Sturridge and Roberto Firmino as well as new sensation Ben Woodburn, they are not as desperate for a striker as the Hammers. Slaven Bilic is more likely to pursue Teodorczyk, as his forwards have mustered just two goals this season with Simone Zaza, Andre Ayew and Jonathan Calleri all still goalless.

In other Liverpool transfer news, Borussia Dortmund’s sporting director has made a startling revelation about this in-demand attacker.