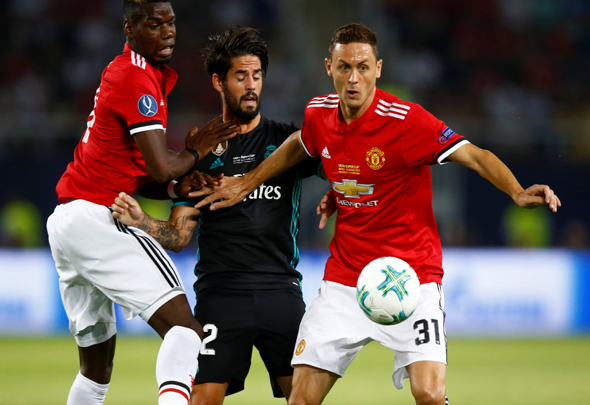 Man United lost 2-1 to Real Madrid in the Super Cup on Tuesday night, and the result was a fair one with Real Madrid dominating the game from start to finish.

There were two real high points for manager Jose Mourinho though, which he’ll take to the opening game of the Premier League against West Ham on Sunday.

The second was Matic himself, who was United’s best player on the night by a country mile.

Without him in the centre of the park the score could have potentially been a lot worse – and Antonio Conte must be wishing he was still a Chelsea player.

Man United fans were quick to recognise this, despite the disappointment of missing out on the Super Cup trophy, and will be looking forward to seeing him in action at Old Trafford this Sunday.

They were also quick to take to Twitter after the game to congratulate the new United man on his fine performance.

Here is a selection of their reactions from after the game.

@ManUtd Matic is gonna be massive this season. #supercup

Lukaku scored , matic was in fine form but that smalling n lindelof defence be questionable

Matic played very good tonight, he's actually one of those anticipated players to make an impact this season

Matic is a beast!

Matic was superb. Surprised Martial didn't get on. Lukaku poor apart from the goal

Matic outstanding, Mkhitaryan looking very sharp but worrying about Lindelof. Hope he's up to it and isn't a waste of money

Matic was outstanding, Thank u once again @ChelseaFC

In other Man United news, here are the Man United player ratings v Real Madrid: 24-year-old star has a 4/10 stinker.