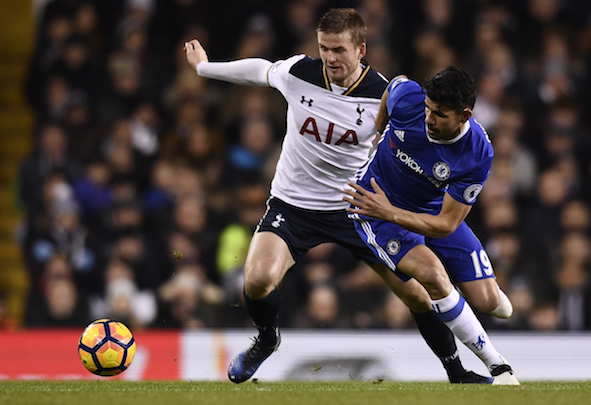 The Three Lions fell to a 1-0 defeat against their international rivals with Lukas Podolski scoring the only goal of the match with a thunderous strike in the second half.

Dier, 23, played the full 90 minutes for Gareth Southgate’s side in the centre of the park with the young boss choosing a centre-back trio of Chris Smalling, Michael Keane and Gary Cahill.

The versatile Dier has mainly become part of Tottenham’s defensive line this season and while he pushed up on Wednesday, many felt that it didn’t effect his display.

One admirer was Keown, who shared that the national team would miss him if he moved into the back four.

“I would like to see Eric Dier in one of those positions but we do not possess enough midfield players to make that happen,” told Keown to the Daily Mail.

“If you look at his body type and stature he is best placed to play in a back three but it is unlikely that will happen at the moment.

“It looks like the best selection would be Gary Cahill, John Stones and Chris Smalling with Dier in midfield.

“Dier was as impressive as any England player last night. He had to do a lot of miles and if he did play in the back three England may miss his stature in midfield. He is competitive both in the air and on the ground and is developing a real eye for a pass.”

Dier was one of the few England players to leave the European Championships in the summer with any credit following a thunderous free-kick goal against Russia as well as a number of top displays in the heart of the team.

It is highly likely he will start once more against Lithuania at the weekend in the World Cup qualifier and Tottenham fans will be hoping he can bring his impressive form back to the club.

The north London side will travel to Turf Moor to face Burnley after the international break and they will be aiming for all three points as they look to keep the pace with Chelsea.

In other Tottenham news, Piers Morgan has fired back at Spurs star Harry Kane on Twitter.