Gabby Agbonlahor has insisted Julian Nagelsmann will be Daniel Levy’s only choice to succeed Jose Mourinho at Tottenham.

Mourinho left the north London outfit on Monday morning and former midfielder Ryan Mason has been placed in interim charge until the end of the season.

Football Insider understands Spurs have already made contact with Nagelsmann and he is their number one choice to replace Mourinho.

Leicester City boss Brendan Rodgers is also in the running but quickly moved to dismiss talk of him taking over in north London.

Asked whether he thought the Northern Irishman may take the job, Agbonlahor told Football Insider correspondent Connor Whitley: “No way.

“I can only see Nagelsmann.

“Daniel Levy will look at Tuchel at Chelsea and the impact he’s had. That new school type of manager.

“He will look at him and think ‘Ok, you know what? I want to bring in somebody like him.’

“They won’t get for somebody like Brendan Rodgers, who’s a great manager.

“They will bring in somebody like Nagelsmann who’s doing very well and can take Spurs where they want to be. I think they’ll hold out for him.

“That’s why nobody will be announced to the end of the season when he’s available.” 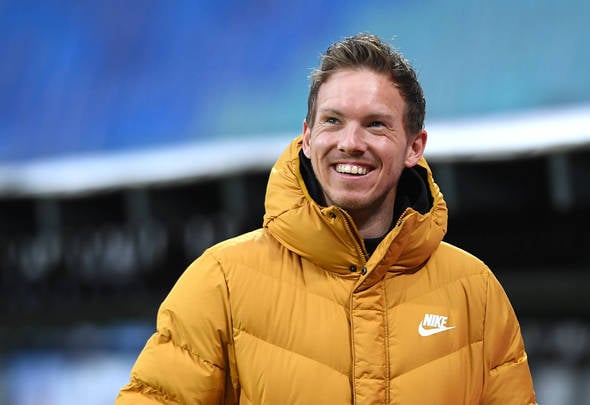 Nagelsmann, 33, is the manager of RB Leipzig, who are second in the Bundesliga and were in this season’s Champions League before Liverpool knocked them out at the last-16 stage.

Goalkeeper Tim Wiese labelled him “mini Mourinho” while he was assistant coach of Hoffenheim.