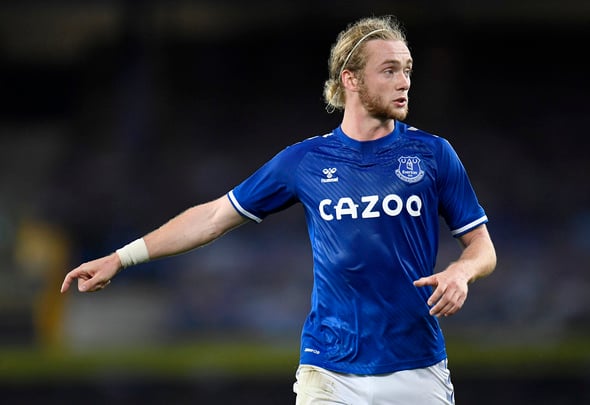 Danny Mills has hailed young Everton midfielder Tom Davies and claimed he is starting to look like an established star.

Speaking exclusively to Football Insider, the former England and Manchester City defender warned that Davies will likely be dropped from the starting XI when Allan returns to full fitness.

The 22-year-old has started eight of the Toffees’ last 10 Premier League games and played the full 90 minutes in their 2-0 win over Liverpool in Saturday’s Merseyside derby. 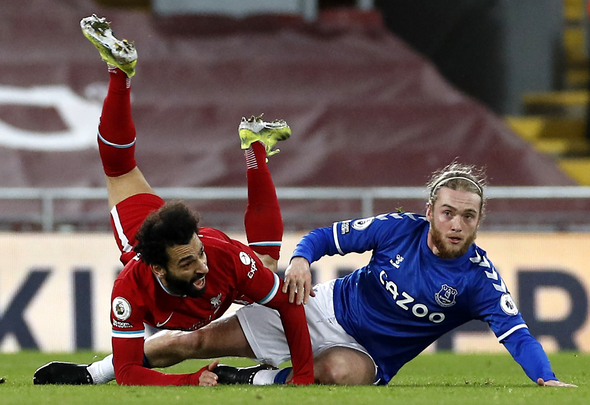 He made five tackles – more than anybody else on the pitch – and won six of his 10 duels, according to sofascore.

Davies’ has enjoyed more football in recent weeks in the absence of Allan who made the matchday squad at Anfield for just the second time since picking up a muscle injury in December.

And Mills has claimed the Brazilian will make a return to the Everton starting XI when he regains his match sharpness.

He told Football Insider correspondent Connor Whitley: “Now he’s [Davies] got to the stage where you don’t see him as a young player anymore.

“Maybe in terms of age he is, but he’s quite experienced now. He’s learned and developed.

“He’s thought ‘I can’t get away with erratic performances anymore, I need that solid level of consistency’ and that’s what you’ve seen from him.

“Obviously Allan is a miss and I expect when he’s fully fit and ready to return he comes back into the side.

“With Tom Davies, we know he’s got talent and he’s a good player but maybe now he’s starting to mature and starting to realise ‘Actually I need to be more of a mature player.'”

In other news, Gabriel Agbonlahor has claimed Richarlison must learn English to be a Premier League sensation.