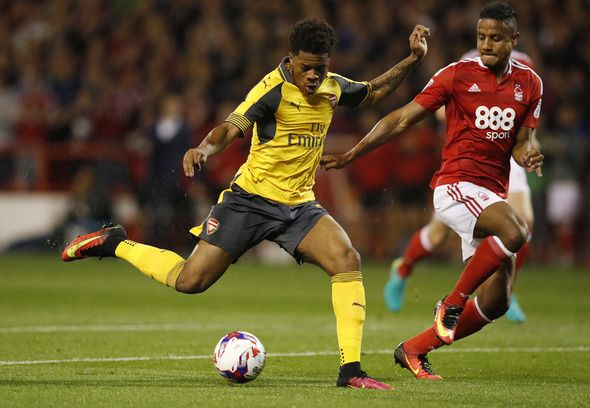 Arsenal have alerted a host of Championship clubs after revealing they are prepared to let Chuba Akpom leave the club on loan this month, according to a report.

The Birmingham Mail has reported that this could be good news for Aston Villa, who are desperate to add to their goalscoring options in the coming days.

The hunt for a new striker this month has proved a long and arduous one for Steve Bruce, and he appears to have failed in his attempts to land Middlesbrough’s Jordan Rhodes.

However, the Aston Villa boss has not yet given up hope of landing a new front-man, and may now seek to take advantage of the availability of one of his former players.

Bruce is a keen admirer of the 21-year-old, having signed him for Hull last season, where he scored seven goals on their road back to the Premier League.

Arsene Wenger declined the opportunity to send him out on loan six months ago, hoping that his young star could have an impact in the first-team squad, only for an injury to throw a spanner into the works.

But the England Under-21 international has managed just one senior appearance for the Gunners this season, and Bruce could be prepared to welcome Akpom back into his care for the remainder of the campaign.

No formal approach, however, has yet been made by Aston Villa.

Villa have struggled for goals this season, and the matter has been made worse by the absence of Jonathan Kodjia and Jordan Ayew for the Africa Cup of Nations.

Rudy Gestede, meanwhile, was sold to Middlesbrough at the start of the month, while Ross McCormack has been ruled out of contention by Bruce after a row last week.

Unless he recalls McCormack, Bruce is left with just Gabby Agbonlahor as his only outright striker option, so Bruce will be particularly keen to push through a deal for Akpom in the coming days.

Arsenal may have had plans for Akpom six months ago, but it is clear that it is not the case right now. Alexis Sanchez and Olivier Giroud have given Arsene Wenger little reason to change things in attack, while Danny Welbeck has also returned from his long-term injury. Akpom will struggle for game-time between now and the end of the season, and a move to Villa would do him good. He may not be familiar with the environment at Villa Park, but he is familiar with the manager and Bruce is the perfect choice to help continue his development. Akpom will get his fair share of opportunities given Aston Villa’s current striker crisis, and can do a real job for them in the Championship.