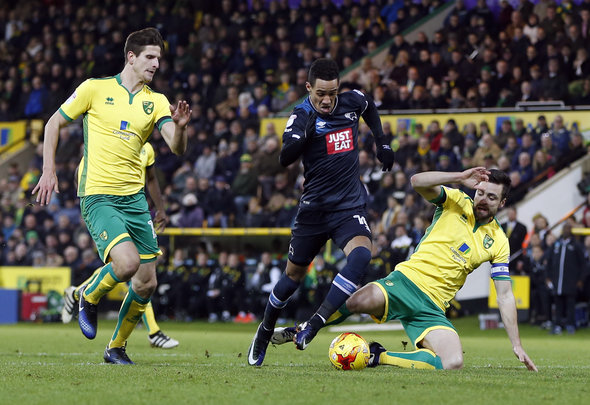 Newcastle are planning to use Grant Hanley in part of a swap deal to land Derby’s Tom Ince, according to a report.

The Mirror claims that the 25-year-old has recently been the subject of a £4million bid from the Rams and that Ince’s availability could see the two players switch allegiance.

It is understood from the Mirror’s sources at Pride Park that Gary Rowett wants at least £10million for the attacker, who has scored 15 goals in all competitions this season.

Rowett is said to want rid of the former Liverpool and Hull player in order to free up funds to strengthen other areas of his squad.

The former Birmingham boss wants to thin down what is already an inflated squad down to 23 players, which means that seven squad members could be axed.

Ince, 25, has been a key member of the tea though, as his exploits this season has seen him become the Rams top goal scorer, while also having his hand in eight assists.

Newcastle manager Rafa Benitez is set to make big improvements to his squad after securing promotion to the Premier League at the first time of asking.

Owner Mike Ashley has recently offered his full financial backing to the ex-Liverpool and Real Madrid boss as he looks to ensure that the Magpies do not suffer a third relegation from the Premier League.

Hanley clearly has no future at St. James’ Park after failing to hold down a regular first-team spot in the Championship. It’s unlikely he’ll get closer to Benitez’s big plans over the summer as Newcastle prepare for life back in the top flight. Ince is a good player; he’s fast, supplies assists and has an eye for goal. His previous time in the Premier League with Hull and Crystal Palace weren’t very successful though, and it remains to be seen whether he can step up to the level. Christian Atsu and Matt Ritchie have more experience in that area and it’s doubtful that Ince is an improvement on the pair.

In other Newcastle news, fans have reacted on Twitter after reported interest in a Serie A 31-year-old.