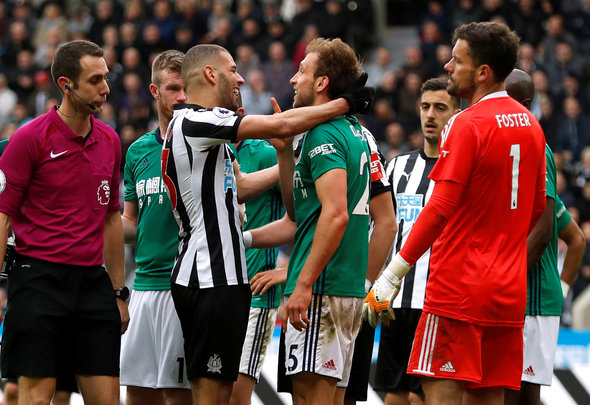 Newcastle United fans have taken to social media to react to the potentially season-ending bombshell involving Islam Slimani after he was charged with violent conduct by the Football Association.

The FA revealed the charge, which carries a three-game ban if found guilty, via both their official website as well as their spokesperson Twitter account, after the Algerian had featured in the 1-0 defeat to West Brom at St James’ Park on Saturday.

The 29-year-old striker, who is on a season-long loan from Leicester City after signing from the Foxes back in the January transfer window, was making just his fourth appearance for the Magpies after injuries have plagued his time on Tyneside.

The incident in question saw Slimani apparently kick out at Baggies defender Craig Dawson in the 80th minute following a coming together at a corner, but it is said to have been missed by the match officials, and if he fails to appeal, or win an appeal, it will be his season over, with the Magpies having just three games left to play.

The news was not taken well by the Newcastle faithful on Twitter, who dubbed the forward’s stint at the club a waste of time.

Can Rafa just sent slimani back to Leicester now? I would.

We paid Slimani £2m to kick Craig Dawson. I could've done that for free

He lashed out. Deserves it tbh. Oh well. Not like he has done anything. Also not the type of striker we need until we sign someone that can cross a ball on his head… Yedlin & Ritchie final balls been poor last few games

Slimani back to Leicester after playing 130 minutes since January 🙈😂 at least his arrival got Dwight Gayle to pull his finger out so every cloud and all that! 👌🏼

Islam Slimani over Mitrovic.. Well that worked out well didn’t it! 👀😂 #NUFC

In other Newcastle United transfer news, the club have been named as a suitor after offers were tabled for a Champions League maestro.