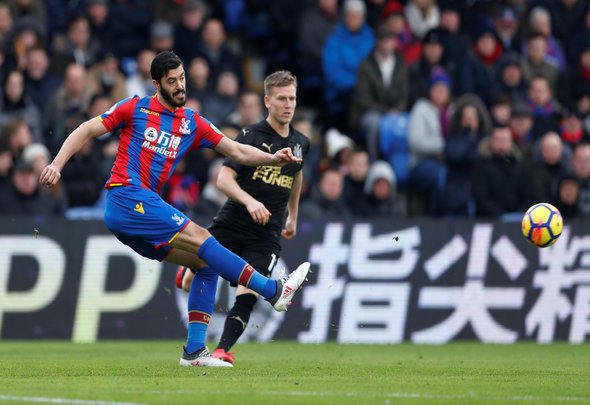 Newcastle United fans have taken to social media to slam the display of winger Matt Ritchie during the club’s 1-1 draw away at Crystal Palace on Sunday.
The Magpies took the lead against the Eagles in the first half through midfielder Mohamed Diame, who poked home at the back post after the ball squirmed through a box full of bodies.
However the second half saw Christian Benteke fouled inside the box by Ciaran Clark, with Luka Milivojevic dutifully dispatching the penalty from the spot despite Karl Darlow’s efforts which saw him get a hand to the shot.
The Toon Army turned to Twitter to voice their displeasure with what they saw from Scotland international Ritchie, who has been a stalwart in the first team this season with 24 top flight appearances under his belt, the most of any Newcastle player during the current campaign.
Here, Football Insider has rounded up a selection of the supporters’ best tweets:

Amazing how Ritchie creates the optical illusion that he is running at speed.

Gayle needs to come off here, he looks so disinterested, his confidence is shot to bits. Get Atsu on and play him though the middle behind Perez. Ritchie has been quiet again #NUFC

My #NUFC HT thoughts:
– This is just about fighting and sticking together. Tight game
– Ritchie is extremely poor with the ball
– our fans are a credit to the game itself
– Diame is better than Messi and Kante combined

Ritchie has had a bad day at the office so far, contributed nothing going forward. #NUFC

Ritchie has been a passenger for most of the season. He offers Yedlin very little in front of him either #nufc

The point leaves Newcastle sitting precariously close to the relegation zone in 16th, just one point above 18th placed Stoke City and two points and two places behind Palace, who jumped above Southampton.
The Magpies’ next game sees them play host to Manchester United in a week’s time.
In other Newcastle United news, the club tabled a last minute bid to snap up a top flight striker.