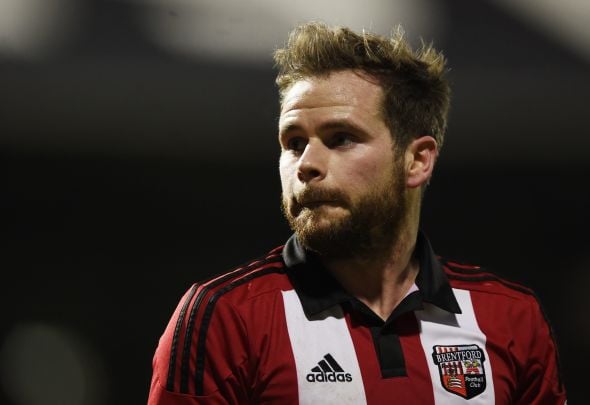 Newcastle’s hopes of signing playmaker Alan Judge during the January transfer window have been given a boost, according to a report.

The Chronicle claim the Brentford playmaker “was on the Magpies’ wish-list in August when the club looked into the possibility of bringing him to St James’ Park”.

It is said that news from the capital on Thursday morning that Judge could return to light training in January “means that the possibility of a move to Newcastle during the winter window remains open for Judge”.

Judge, 28, has not played since suffering a double-leg fracture against Ipswich in April, the same injury that ruled England international Luke Shaw out for most of last season.

Brentford’s number 18 came to prominence in England’s third tier, developing a reputation for being a goalscoring number 10 with League One outfit Notts County, where he scored 16 goals in his last two seasons before moving to Blackburn Rovers for around £300,000.

The 5ft 6in attacking midfielder flopped at Ewood Park but rejuvenated his career when he moved to Brentford in the summer of 2014.

Judge has a fine record for the Championship side, scoring 24 goals and supplying 31 assists in 102 matches. Last season, the Republic of Ireland international was especially impressive, with 38 league games yielding 14 goals and 12 assists.

Judge is out of contract at Brentford next summer.

Judge proved last season that he is one of the finest players operating in the Championship but Newcastle would be foolish to splash out £10million on him in January if he has not proven his recovery from a broken leg. Given that he is not even expected to return to light training until a third of the way through January, that is unlikely. Newcastle risk a rival club taking advantage of Judge’s contract situation by snapping him up in the winter window but it would be reckless to buy a player who is some way short of full fitness and returning from a serious injury. For the Magpies, the jury must remain out on Judge until next summer, when they will be better placed to decide whether he would be a good signing. By which point they will almost certainly be in the Premier League.

In other Newcastle transfer news, the agent of a £14million Newcastle attacker has claimed his client could quit the club next year amid January interest.