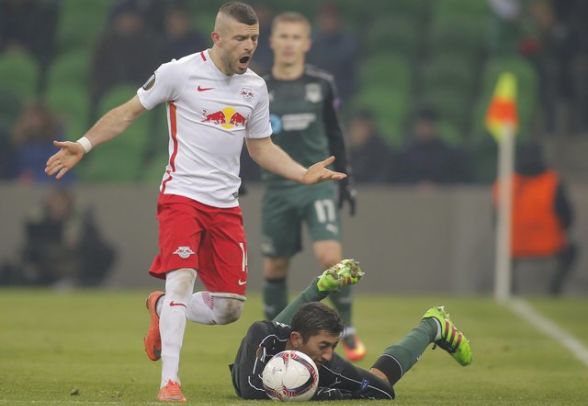 Newcastle United deployed a scout to keep close tabs on Red Bull Salzburg attacker Valon Berisha earlier this month, according to a report.

Scouting experts Scouts in Attendance claimed on their Twitter account that recruitment experts of the Magpies and Leicester had jetted out on a transfer mission to cast the rule over Berisha, 24, in his side’s Europa League clash with Vitoria Guimares.

It is understood that many other scouts from teams across the Premier League were also at the fixture including Tottenham, Arsenal, Southampton and West Brom.

Berisha won the Austrian league title with Salzburg last season, helping them qualify for the Champions League before they slumped out of that into the Europa League after losing in the play-offs.

The five-times Kosovo international scored when he played in front of the Newcastle scout in a 1-1 draw for his side away at the Portuguese club.

He played in the centre of the midfielder for that fixture, but usually Berisha plays as an attack-minded winger on the left flank, and that has seen him become a regular source of goals.

The former Norway international, who switched allegiances after Kosovo was recognised by FIFA, has scored five goals in 15 appearances across all competitions this season, as well as supplying four assists.

The Sun reported in August that Newcastle were keen on a loan-to-buy deal for Berisha as his £12million valuation was too high for them.

However although nothing materialised, it appears clear that the Magpies remain interested in signing him.

Berisha looks like a very good player, and if anything he is too good for the Austrian Bundesliga. Although he is guaranteed yearly European football there, nothing quite matches the Premier League so he may be quite easy to persuade to join Newcastle. His £12million valuation is a lot for a cash-strapped Newcastle side, but as previously reported a loan-to-buy deal could still be an option in January. The Magpies need strengthen all over the pitch after a poor summer and Rafa Benitez cannot let the good start to the season mask over that fact. Unless recruits are bought in over the winter, the second half of the campaign could be a very nervy one.

In other Newcastle United news, Jamie Carragher has blasted the signing of this 27-year-old.