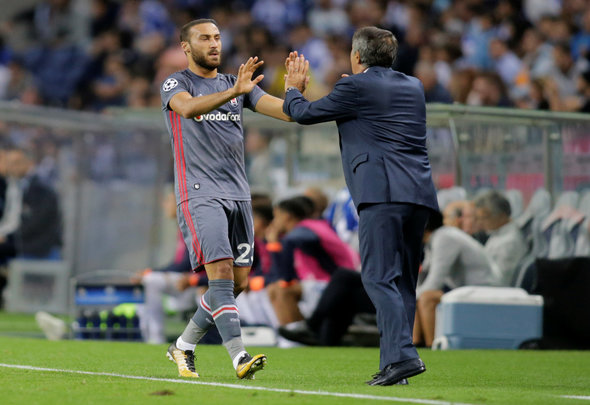 Newcastle United are still keeping tabs on Besiktas striker Cenk Tosun after sending scouts to watch him in international action, according to a report.

Twitter account Scouts in Attendance, who have built a reputation as a reputable source for naming clubs’ scouts at various matches, named the Magpies as one side who attended Turkey’s home defeat to Iceland on Friday.

The north east side were named alongside Premier League rivals Tottenham, Arsenal and Crystal Palace, with 26-year-old forward Tosun named as the target for some of those in attendance.

The Daily Mail claimed back at the end of August that both Newcastle and Palace made a late move to secure the striker’s services, although neither side were able to prise him from Besiktas.

Tosun admitted that the Eagles had made a late bid to sign him, and insisted that although a move did not come off, he wants to secure a move to England in the future.

Spurs have also reportedly been very interested in his services in recent times, with turkish-football.com claiming that the North London side have been monitoring his progress.

He has scored 54 goals in 127 appearances for Besiktas during his time at the club, and has continued his fine form this season with four goals in nine appearances.

The Turkish international has also picked up 22 caps for his country, although has only managed to net six times on the world stage.

Newcastle seem the best placed out of all of Tosun’s Premier League suitors to be able to secure a deal. They would be able to offer him first team football, unlikely at Tottenham with Fernando Llorente already firmly second choice to Harry Kane, while also demonstrating a squad worthy of competing in the Premier League, unlike Crystal Palace so far. Joselu, Dwight Gayle and Aleksandar Mitrovic are all yet to prove their top flight quality and the added competition would only be a boost for Newcastle’s hopes of survival. However, finances may play a role, and with Mike Ashley at the helm, it is highly unlikely he would sanction a big money move for an unknown quantity.

In other Newcastle United news, a date has been set for when potential investors want to have secured the takeover of the Magpies.