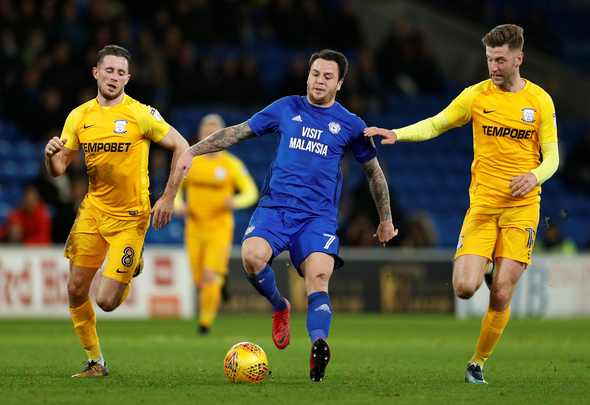 Nottingham Forest are in talks with Cardiff City about signing attacker Lee Tomlin on loan, according to a report.
The Daily Mail Live Transfer Blog (Wednesday, 17:51) report that Forest are expecting Tomlin to arrive at the City Ground before the transfer window closes on Wednesday.
The same report also reveals that the Bluebirds are keen on signing Jamie Ward from Nottingham Forest, but he is expected to join Millwall.
Tomlin has found himself on the fringes of Cardiff squad this season, as despite making 13 Championship appearances, he is yet to complete 90 minutes in the league.
Despite this, the 29-year-old has managed to grab a goal in one of his 13 outings, scoring against Reading in November.
Tomlin can be used as a secondary striker but has shown that his is more than capable as featuring as an attacking midfielder or a right-winger.
Football Insider Verdict
This is a smart signing by Nottingham Forest if they manage to pull it off. Tomlin has made over 209 appearances in the Championship this season, and brings a lot of vital experience to the team. The 29-year-old also has shown that he is as sharp as ever by managing to score this season, despite being used sparingly by Neil Warnock. The striker is also no doubt aware that he can secure a permanent move if he impresses, as Cardiff City could be in the Premier League next season, and that will cause them to no doubt get rid of Tomlin. This incentive might spur him on to deliver superb performances in the second half of the season for Forest.
In other Nottingham Forest news, ‘Great signing, ‘Perfect deal’ – Forest fans react to top-flight signing.