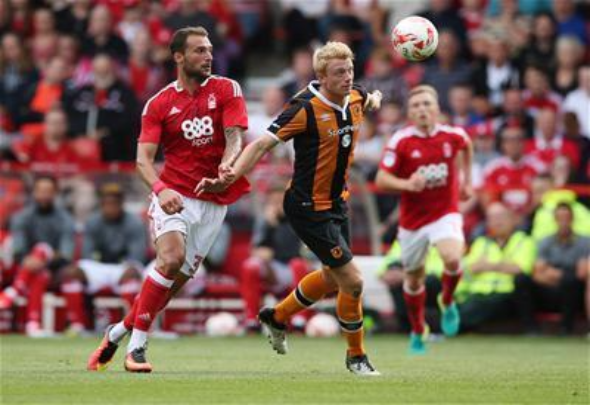 Nottingham Forest earned a late 2-2 draw against Aston Villa at Villa Park on Sunday afternoon and their players took to Twitter to celebrate the tie.

Philippe Montanier’s side went into the match with back to back victories in their previous two games against Leeds and Wigan, but it took an 87th minute Henri Lansbury strike to take away a point in the clash against Villa.

Forest took the lead through a wonder strike from Greek forward Apostolos Vellios before Ross McCormack and Rudy Gestede put Aston Villa ahead with two goals in quick succession.

The Reds were clearly delighted with the late Lansbury goal and a number of first team players including Vellios, Pajtim Kasami and Matthew Cash took to Twitter after the match hailing the team spirit within the side.

@lansburyhenri get in mate👊🏼👊🏼👊🏼 difficult game today and got a great point! Fans were unreal 🙌🏼 #nffc pic.twitter.com/BBgmi4gtkq

Good result in a difficult game against a good team . To keep adding points. #NFFC 🔴⚪️⚽️®‼️

Shows the team spirit in this squad 👏 #nffc pic.twitter.com/23Plr19EA3

Nottingham Forest sit in tenth place after their opening six games picking up 10 points in the early stages of the new campaign.

Montanier’s side are looking to improve on their 16th placed finish from last season and as well as bringing in the French boss, they have added 12 senior faces to their squad.

Their most notable additions include former Arsenal youngsters Nicklas Bendtner and Armand Traore, while also adding Vellios, who has had experience playing in the Premier League with Everton before.

In other Nottingham Forest team news, Matthew Cash delivered a message on Twitter saying that he was “gutted” after leaving the pitch early with an injury.