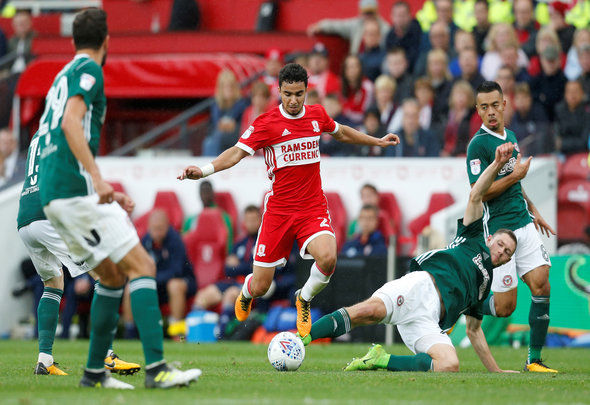 Nottingham Forest are targeting a raid on Middlesbrough with a swoop of their left-back Fabio, according to a report.

The Nottingham Post have suggested that Reds boss, Aitor Karanka, wants to reunite with the player he signed himself for the Teesside club for £2million from Cardiff City in 2016.

It’s not the first time this summer that the Tricky Trees have attempted a raid on the Spanish manager’s former club as a report in the Mirror via their live transfer blog on Saturday [11:09pm], revealed that Forest have launched an £8million pursuit of striker Patrick Bamford, which has been rejected.

The Brazilian Fabio is a two-time Premier League title-winner thanks to his time at Manchester United.

The left-back spot in the Forest side is definitely a position where strengthening and bolstering is required ahead of the new campaign. Now that Eric Lichaj is a Hull City player and Juan Fuentes is struggling with a broken leg, Karanka knows that he has to fill the void that has been left in the aftermath of the players’ absences. Fabio was at one time considered one of the most promising youngsters in the game but his career has faded away in recent years to the point where even at the Riverside Stadium he is not fancied by manager Tony Pulis having been cast into the shadows in the aftermath of the 60-year-old’s appointment. Signing the now 27-year-old would make sense for all parties –  Karanka would be landing a player that he trusts, Boro would be offloading a player who they really have no need for, and Fabio himself would be resurrecting a career that is heading into the wilderness.