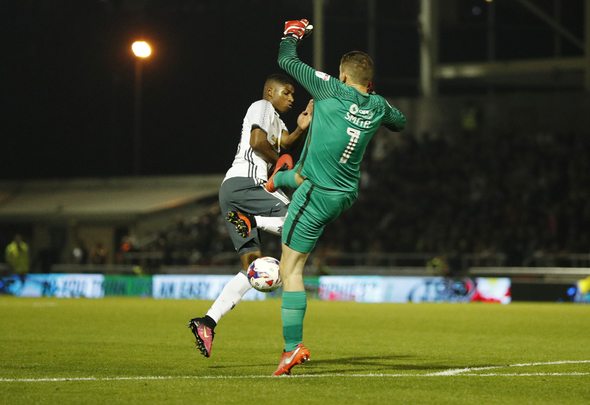 Nottingham Forest are keeping tabs on Northampton goalkeeper Adam Smith, according to a report.

The Sun claims that the Reds are battling with local rivals Derby for the shot-stopper, who is out of contract in June and has recently revealed that he will be leaving Sixfields at the end of the season.

The 25-year-old posted a message on his personal Twitter page that confirmed he will be “moving on next season” and will not be signing a new deal with Northampton.

It is understood that League One champions Sheffield United are also interested in the former Leicester ‘keeper.

However the Sun reports that Smith is looking for a step up from the third-tier, and that is something that Forest won’t be able to deliver if they fail to avoid the drop in the Championship finale on Sunday.

Mark Warburton’s side know that a win might not be enough to keep themselves in the division, with Blackburn and Birmingham also fighting to keep their heads above water.

Smith was a part of the Northampton team that won the League Two title last season and was also named in the Football League team of the year.

He’s made 44 appearances across all competitions this term, keeping nine clean sheets and conceding 69 goals as his side managed to avoid relegation.

Smith’s agent, Liam Bowes has said that he isn’t surprised by the amount of interest in his client.

“The link between Adam and Sheffield Utd is an obvious one because of Adam’s connection to the manager. I won’t comment on specific teams,” said Bowes, as quoted by the Sun.

“When a goalkeeper of Adam’s ability is available without a fee, naturally you expect this level of interest from Championship teams.”

Forest have to sign a new goalkeeper in the summer and it looks like Smith might be a top addition to the side. It’s an area that Forest have struggled with this season with Stephen Henderson’s long-term injury playing havoc with the club’s survival hopes. Vladimir Stojkovic and Dimitar Evtimov are not good enough to play for the club while academy product Jordan Smith has stepped up and done a good job when you consider his experience. However Forest’s league stature is going to be a major thing to consider in this deal as Derby and Sheffield United can both guarantee him League One football next season, whereas, at the moment, Warburton and his side cannot.

In other Nottingham Forest news, this 24-year-old has announced a possible Forest exit on his Facebook page.