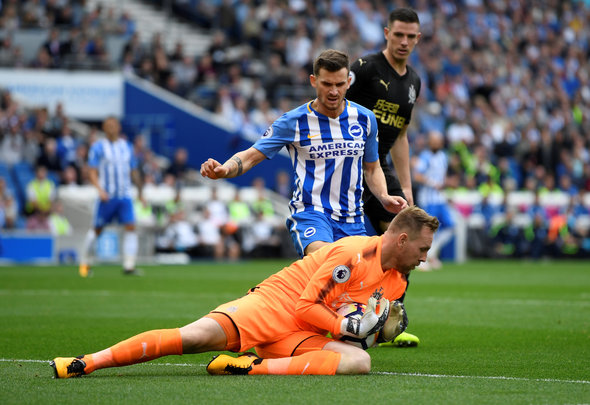 Newcastle United manager Rafa Benitez says goalkeeper Rob Elliott will have to wait until tomorrow to find out whether he has lost his place as the club’s first-choice goalkeeper for good.

The 31-year-old had played in all of the Magpies 13 Premier League matches, before he was dropped by Benitez in favour of Karl Darlow for Tuesday’s 2-2 draw with West Brom.

Craig Hope, a journalist for the Daily Mail, broke the news from Benitez’s press conference on his official Twitter account on Friday afternoon.

Benitez says Rob Elliot will have to wait until tomorrow to find out if he has lost the No.1 jersey to Karl Darlow on a permanent basis

Darlow was Newcastle’s first-choice goalkeeper under Benitez in the Championship last season, making 34 league appearances as the Magpies clinched the title.

His only previous appearance this campaign was the 3-2 EFL Cup defeat against his former club Nottingham Forest, but he was given his chance on Tuesday with Elliot dropping to the bench.

The Magpies battled back from 2-0 down to earn a point, thanks to a Ciaran Clark header and an own goal from Johnny Evans.

It remains to be seen whether the 27-year-old did enough to keep his place in the starting line-up for the Premier League clash with Chelsea.

The Magpies travel to Stamford Bridge in Saturday’s early kick-off and will be looking to build on their result against the Baggies, which ended a run of four consecutive defeats.

Benitez’s side are currently 12th in the Premier League table, with 15 points from their opening 14 matches.

In other Newcastle United news, former Magpies goalkeeper Shay Given has delivered his verdict on his old club’s season so far.