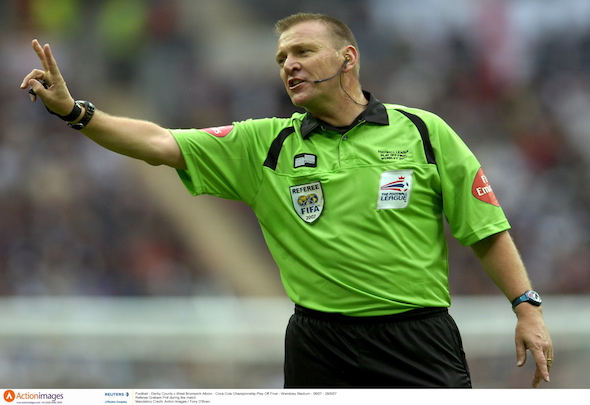 Former Premier League referee Graham Poll believes that West Ham United attacking midfielder Manuel Lanzini did dive against Stoke, but says the incident is not worthy of an FA charge.

He also accused Moyes of deception with his comments over Lanzini going down because he was tired, saying he was “pulling the wool over” people’s eyes.

The 24-year-old went down in the box under the challenge of Stoke defender Erik Pieters and referee Graham Scott decided to award a controversial penalty, which was scored by Mark Nobel.

The Hammers would go on to win 3-0 in the Premier League clash on Saturday afternoon, and after the game Stoke boss Mark Hughes accused Lanzini of diving in his post-match interview.

New laws to punish simulation were introduced in May and the BBC reported that Lanzini has been found guilty of diving by the FA and has until 6pm on Tuesday to respond to the charge.

Former Premier League referee Poll, believes that the player is guilty of simulation, but says the dive is not worthy of a ban.

“It’s a bit of a dive, but not an outrageous dive deserving of an FA charge,” Poll told the Daily Mail.

“I’m sorry if that doesn’t make sense, but that’s how hard it is to referee players such as Manuel Lanzini.”

West Ham boss David Moyes admitted in his post-match interview that he would have been disappointed if the penalty was awarded against his side, but insisted that Lanzini’s dive was as a result of tiredness, rather than an a deliberate attempt to fool the referee.

However, Poll totally disagrees with Moyes and sympathises with referee Graham Scott.

“It’s a hard call for the referee Graham Scott. My first thought was dive. Then I thought it was a penalty,” he said.

“The one thing it isn’t is ‘fatigue’ at the end of a long dribble, which is what David Moyes claimed. Sorry David. You’re not pulling the wool over anyone’s eyes with that!”

Everton forward Oumar Niasse was the first Premier League player to be banned for diving and was handed a two-match ban earlier in the season.

In the latest West Ham United news, Hammers fans have reacted to Lanzini’s performance against Stoke.