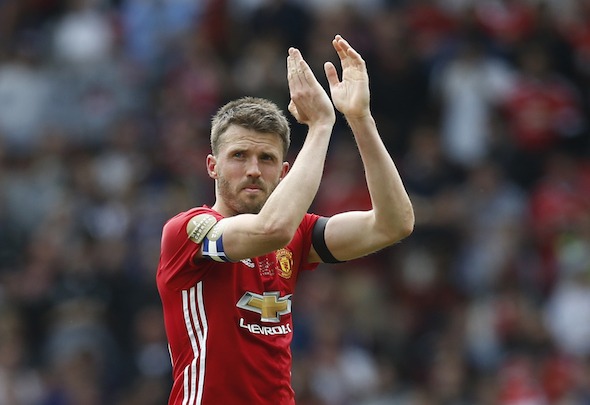 Manchester United midfielder Michael Carrick has emphatically decided that he wants to stay at Old Trafford after Aston Villa approached the Premier League side with an enquiry, according to a report.

ESPN claims that Premier League sides West Brom and Leicester had also contacted United about Carrick, 36, due to him not playing much football under Jose Mourinho this season.

However it is understood that the ex-England international has no plans to leave the Premier League title contenders and Mourinho is also said to be happy for him to stay.

The report claims that Carrick is in the final year of his contract with United but is looking towards the future by working towards earning his coaching badges.

The former West Ham and Tottenham ace has made just one appearance this term and is well down the Man Untied pecking order with Nemanja Matic, Paul Pogba, Marouane Fellaini and Ander Herrera all playing regularly.

The midfield enforcer has been a key part of the Man United first-team over the years though, making a total of 460 appearances since signing for them in 2006.

Steve Bruce hasn’t been afraid to sign up experienced players since taking charge at Villa Park. John Terry, Glenn Whelan and Chris Samba were all bought in over the summer with varying degree of success. Carrick wouldn’t represent any risk at all though as the midfielder is just sheer class and could easily play for the other teams who want him in the top-flight, West Brom and Leicester. He would also force Whelan out of the first-team for Villa, but unfortunately it doesn’t seem as though any deal will come to fruition due to his plans to stay at United. Carrick is a leader and will no doubt make a good coach, or even manager, in the future.

In other Aston Villa news, Simon Jordan took a huge swipe at Birmingham ahead of Sunday’s Second City derby clash.