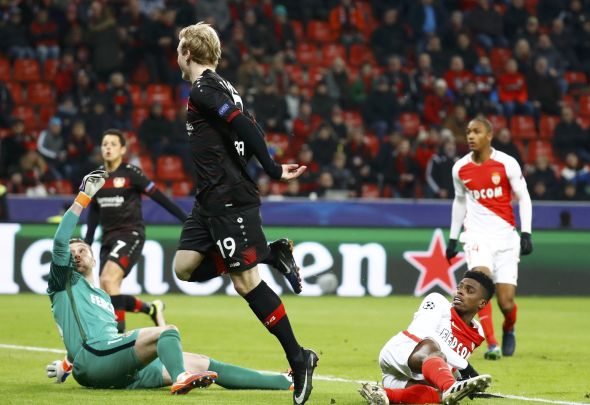 Liverpool will make a big push to sign Bayer Leverkusen sensation Julian Brandt in the summer, according to a reliable journalist.

Liverpool Echo correspondent James Pearce has revealed in a question-and-answer session (2.25m) that the Merseysiders are keeping close tabs on the Bundesliga winger.

Liverpool were strongly linked with Brandt, 20, earlier this month but Leverkusen were unwilling to sell the emerging star.

Asked if manager Jurgen Klopp would make a move for Brandt in the next transfer window, Pearce replied: “Yes, I do. Klopp is a big fan and would have bought him in this window if Leverkusen had been willing to sell.

“Liverpool will be hoping that unlike Pulisic, Brandt doesn’t pen a new deal.”

It has been reported that scouts from the Premier League club have been regularly watching Brandt, who is rated in the £20million bracket.

The left-sided attacking midfielder has earned rave reviews for his performances for Leverkusen, with his 23 matches this season yielding three goals and six assists.

Brandt, who has been capped four times by the senior Germany team, has already made 116 appearances for the Bundesliga outfit despite his tender age, scoring 19 goals and supplying 22 assists in all competitions.

The youngster, who joined Leverkusen from Wolfsburg in 2014, is currently contracted until 2019 but reports in Germany suggest he has a release clause of around £17million which could be activated in 2018.

However, it appears increasingly likely the Reds are set to test the Bundesliga outfit’s resolve come the summer.

There will be stiff competition with Bayern Munich among those clubs also linked with trying to win the youngster’s signature.

In other Liverpool transfer news, the club have tabled a mega bid for a young defender and a record-breaking deal has been agreed.