Kevin Campbell has urged Eddie Nketiah to leave Arsenal on loan in January in search of more regular game time.

The former Highbury favourite, speaking exclusively to Football Insider correspondent Dylan Childs, is adamant that the 21-year-old would benefit from a spell away from the Emirates in 2021.

Nketiah started his second consecutive Premier League match on Saturday as the Gunners slipped to their eighth defeat of the season at Goodison Park. 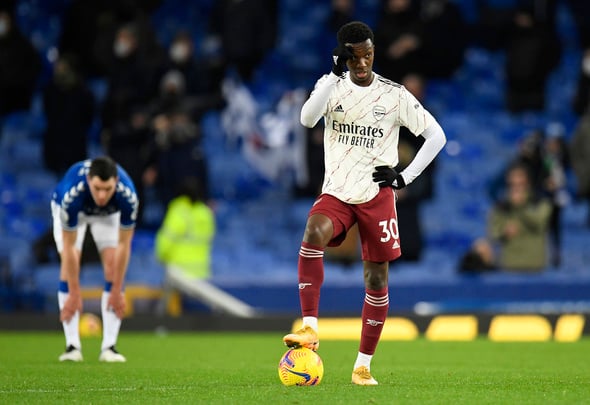 The striker, who spent the back-end of 2019 on loan at Leeds, has scored five goals in 12 starts and nine substitute appearances this season.

Campbell believes Nketiah would be “different class” if he had an extended run of starts elsewhere.

“Nketiah grabbed a great assist against Southampton and Mikel Arteta is just trying to find the right balance,” he told Football Insider.

“It really is difficult. I think Nketiah needs a season under his belt playing regular football.

“It is one thing coming in now and again at Arsenal but you never become seasoned that way. When you play week in, week out you learn so much more.

“He did not really start during his loan spell at Leeds. Nketiah should be going out on loan to learn his trade, he really should.

“He is not going to start for Arsenal very often so what does he do? Is he happy just sitting on the bench?

“Once he learns his trade has will be a different player because he knows where the goal is.”

In other news, it can be REVEALED that an Arsenal defender has opened talks with the club over a new long-term deal.