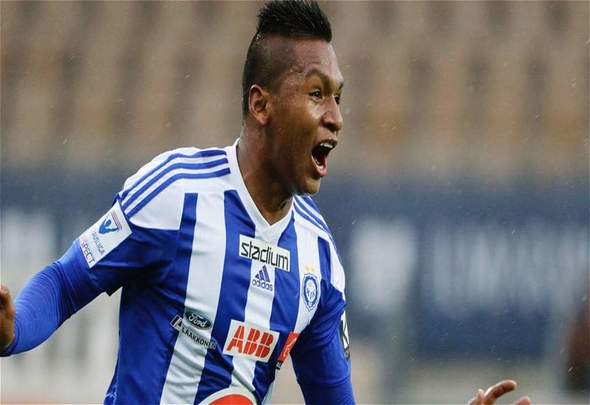 Rangers have struck a £1million deal to sign Colombian striker Alfredo Morelos, according to a report.

The Scottish Sun have reported on Friday morning that the Gers have agreed a seven-figure fee with Finnish club HJK Helsinki for the 20-year-old forward.

It is detailed that the young striker was recommended to Rangers boss Pedro Caixinha by assistant and former Finland international Jonatan Johansson.

Morelos will also need a work permit if he is to transfer to Scotland and sources have told the Sun that they don’t envisage any problems in one being granted by the authorities.

The Finnish top-flight is still under way with the league campaign running from April to October and HJK are currently top of the table with Morelos playing a key part in their position.

The young striker has netted a very impressive 12 goals in each of HJK’s 12 league matches this campaign and he has also provided five himself.

Now, if he does transfer to Rangers as it is looking likely fans will be hoping that he can adapt to life in Scotland and bring his goal scoring success with him.

Not much is known of Morelos outside of Finland, but this could prove to be Rangers’ smartest piece of business this summer. The Ibrox giants have missed an out and out striker in the Premiership with Martyn Waghorn struggling to make the step up in the last campaign. Now, it is not a given that Morelos can bring his qualities with him to Scotland, but given that Johansson has stuck his neck on the line to recommend him, this deal could be a similar to one that Celtic made for Moussa Dembele last last summer and the Frenchman has not looked back since.

In other Rangers transfer news, this international forward is the most likely player to join the Gers next according to the whispers. (not Morelos.)