That is according to ex-Premier League shot-stopper Paddy Kenny, speaking exclusively to Football Insider after the Daily Record reported that Goldson, 28, is set to sign a contract extension keeping him at Ibrox until 2024.

He is the latest Rangers man to agree fresh terms in recent weeks after Jamer Tavernier, Steven Davis and Allan McGregor. 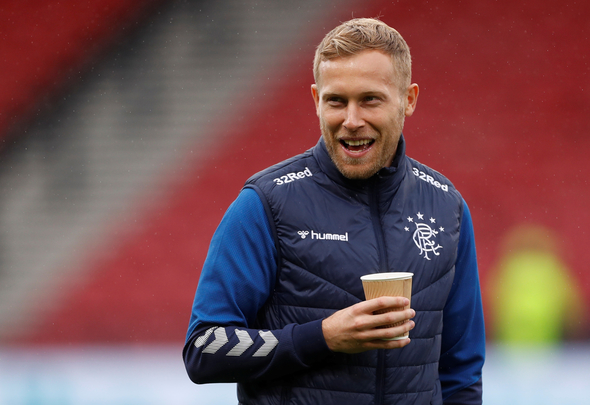 Arfield, who signed from Burnley in 2018, sees his contract expire in the summer of 2022.

He has been a mainstay in Steven Gerrard’s title-winning Rangers side this season, making 43 appearances across all competitions.

Kenny claims that Rangers will not let the 32-year-old midfielder enter the final year of his deal and risk losing him on a free.

“I’m surprised they’re letting players like Arfield run into the last year of their contract.

“You know what can happen nowadays. I’m absolutely sure they’ll address it behind the scenes.

“They’ve done really well to get some of their other boys on new deals and it’s clearly an area they’re on top of.

“He’s a key player and it’s something that they need to look to sort out as quickly as possible.”

Rangers ended Celtic’s monopoly on the Scottish Premiership in 2020-21 with Arfield working the levers in midfield.

A 2-0 victory over Celtic in the Scottish Cup on Sunday means the Light Blues’ dream of a double is still on the cards.

In other news, finance expert explains how Celtic’s £15million advantage over Rangers could disappear in July.