The Scottish giants are in the market for a back-up ‘keeper and have turned their attention to the giant Pole in the final days of the January window.

Ibrox sources have told Football Insider that the club have been made aware that Miazek is available and have held discussions with him, including about a contract offer. 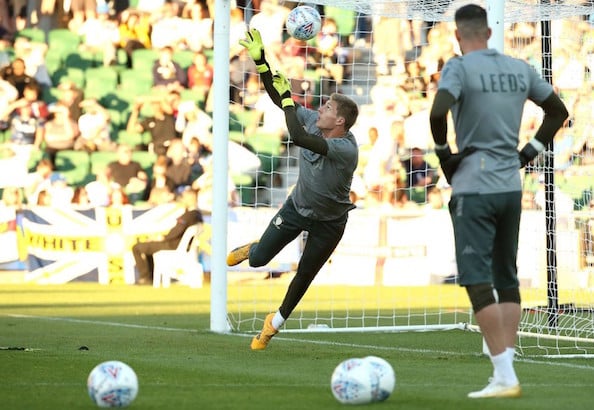 This comes after Football Insider revealed last week that Leeds would listen to offers for the 23-year-old ahead of Friday’s transfer cut-off.

Rangers are looking for back-up to number one Allan McGregor as his deputy Wes Foderingham is out of contract in the summer and expected to leave.

Miazek’s contract expires at the end of the season and Leeds completed the signing last week of 18-year-old Elia Caprile to further bolster their keeping ranks.

That could leave 6ft 4in Miazek fourth in the pecking order behind not only undisputed number one Kiko Casilla and his deputy Ilan Meslier but also Caprile.

36' WHAT A GOAL! Miazek pulls off a great double save, McKinstry superbly drives up the pitch and into the Wolves box. His first strike is saved, but he knocks home the rebound! 0-2 pic.twitter.com/1OvAy2aXfT

Miazek, who was in goal from the start for the Under-23s in their 2-2 draw against Wolves last week, has yet to play for the Leeds first team.

United have the option to extend the Poland youth international’s contract by 12 months but the arrival of Caprile means that is by no means a formality.

In other Rangers news, it can be REVEALED that Gerrard has told the club hierarchy to sell ‘Timid’ Allen signing who’s an ‘absolute world beater’ in training.