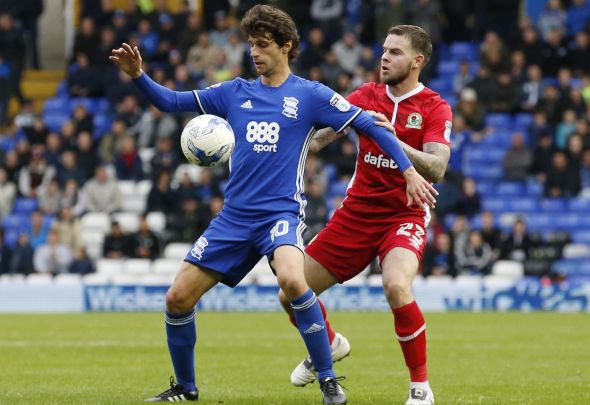 Rangers have been offered playmaker Diego Fabbrini less than a year after he moved to Birmingham for £1.5million, according to a report.

The Daily Mirror claimed in their live transfer blog (December 1, 5:16pm) that Fabbrini had been offered to Mark Warburton’s side after struggling to become a permanent fixture in the Blues side.

The 26-year-old is the most expensive player to move to the Midlands giants in the Carson Yeung era, after signing from Watford in January this year.

However, the one-time Italy international has made just five appearances in all competitions for Gary Rowett’s side this season and is likely to be offloaded in January.

Fabbrini, who moved to England after spells with Udinese, Siena and Palermo in Italy, was signed by Birmingham after an impressive seven goals in 17 starts from midfield while on loan at Middlesbrough last season.

Birmingham are likely to ask for a fee close to the figure they paid for Fabbrini, with three years still remaining on his current St. Andrews’ deal.

Known for his playmaking ability, Fabbrini can play as a central midfielder or as a centre-forward and is known to be used out wide in an attacking role.

A move for the Fabbrini would be good for Warburton’s side, who are on the lookout for players with creativity after scoring just 19 goals in 15 domestic encounters. Fabbrini would fit that category, and with his versatility he could fit into any system deployed by the former Brentford boss. However, the Gers are unlikely to want to spend what Birmingham require on the Italian, as they continue to look to balance the books at Ibrox. But there is no doubt that a player with the quality Fabbrini possesses would terrorise SPL defences.

In other Rangers transfer news, this League One hotshot is also on the radar of Warburton.