Rangers are set to lose out on forward target Teren Moffi as he is putting the finishing touches this week to a blockbuster move to Lorient, Football Insider understands.

The KV Kortrijk front man has been linked with the Light Blues this window after being placed on their list of possible replacements for Alfredo Morelos.

A recruitment source has told Football Insider that Lorient have had a £7.3m bid for Moffi accepted by the Belgian club and he has also agreed personal terms.

It is expected that he will put pen to paper in the coming days on a deal that will take him to the French top flight.

It represents a huge profit in a short space of time for Kortrijk, who only signed Moffi in January for £135,000.

He has scored five goals in 11 matches for the Belgian top flight club and done enough to earn interest from leading clubs across Europe.

Rangers have showed an interest this summer but have signed Kemar Roofe and Cedric Itten to bolster their attack.

Morelos remains at Ibrox despite constant speculation over his future and has knuckled down in recent games to show signs of a return to his sensational form in the first half of last season.

He led the line in his side’s 5-1 demolition of Motherwell yesterday with fellow forward Itten and Jermain Defoe coming off the bench late in the second half. 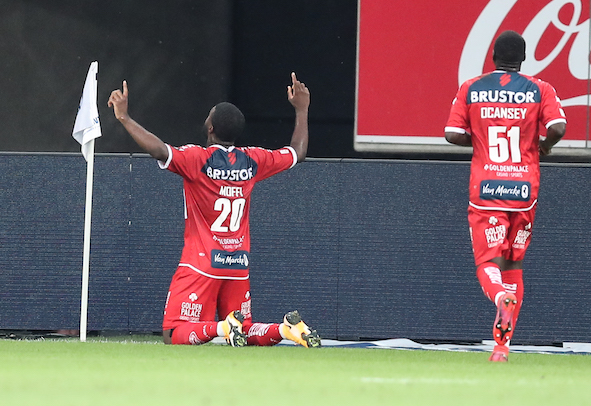 With marquee summer signing Kemar Roofe out injured until at least mid-October, and possibly longer, Morelos remains the first choice for Gerrard.

Lille had a bid for him knocked back earlier in the window and may yet return with an improved offer in the final week of the window.

In other news, there is a huge new update in Rangers bid to lure Daniel Johnson to Ibrox.