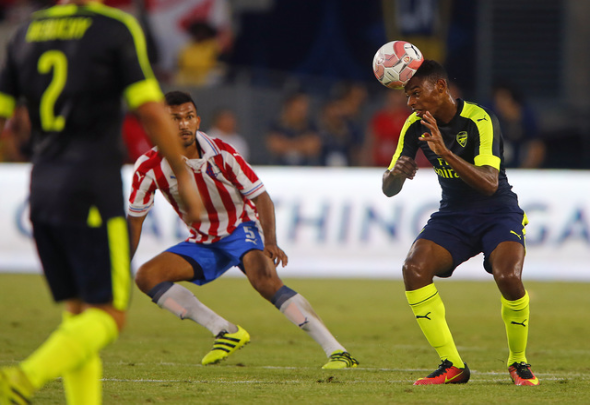 Arsenal midfielder Gedion Zelalem is nearing a move to Bundesliga side Borussia Dortmund, according to a report.

ESPN have claimed that sources close to the 19-year-old have told them that the youngster is closing in on a return to Germany.

The Berlin-born teenager has featured just twice for the Gunners in the EFL Cup this campaign having spent the last season on loan at Scottish giants Rangers.

His contract is set to expire this summer and it is stated that Dortmund believe they can land Zelalem for a cut-price fee.

It is also reported that the midfielder is keen on a return to Germany with his father a Dortmund fan.

Zelalem completed a move to north London in the summer of 2013 from American side Olney Rangers.

He was considered a bright prospect at the club and was even handed a contract extension in 2014 after just one year.

However, he has only appeared in four senior matches for Arsene Wenger’s side in total and it looks like he will soon be leaving the Emirates Stadium.

Dortmund have a history of bringing through young stars at the club and with Thomas Tuchel’s side performing poorly in sixth place they will now be drafting up targets for the winter window.

Zelalem did not do enough at Rangers in the Scottish Championship last season to suggest that he’s good enough for Arsenal. At 19 the young potential tag is nearing it’s end before many believe him just to be a poor player. A move to Dortmund could do wonders for his career, but it is expected that he will only be a squad player at the European giants before another move. The Gunners should now cut their ties with Zelalem and allow more focus on players who can become good enough for a side such as Arsenal in the future.

In other Arsenal transfer news, the Gunners have had this mega-money bid rejected for goal machine.